Sickle cell anaemia, the first disease to be characterised in complete molecular detail, has been in the biochemistry textbooks for decades. Epidemiologists have linked its astonishing spread across Africa to the fact that carriers of the mutant gene, who don’t get sickle cell anaemia, seem to be protected from malaria. But now researchers have come up with a molecular mechanism that explains how it protects people from this deadly disease. This discovery could, in the near future, give doctors a range of new drugs that could save many lives.

Circumstantial evidence, dating back to the 1950s, suggests that the presence of low levels of sickle cell haemoglobin reduces the number of malaria parasites in the blood, while also making red blood cells less vulnerable to them and speeding up the clean-up of infected cells. However, evidence as clear-cut as that linking sickle cell anaemia to the mutant gene remained elusive. 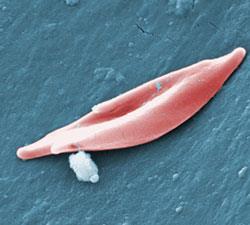 Now, Miguel Soares from the Gulbenkian Institute in Oeiras, Portugal, together with colleagues in France and Germany, have discovered how the human sickle cell gene protects against malaria. Using a mouse model of cerebral malaria, the most lethal form of the disease, they uncovered a detailed protective mechanism. In contrast to the current paradigm, the protection is independent of the number of parasites in the blood. The presence of human sickle cell haemoglobin appears to enable the mice to tolerate much higher levels of the parasite.

In an earlier study, published in 2007, the researchers observed that mice with cerebral malaria accumulate the haemoglobin cofactor, haem, in its unbound form, in the blood. This appears to contribute to the pathology of cerebral malaria. The presence of sickle cell haemoglobin, however, increases production of the enzyme haem oxygenase-1 (HO-1), which was already known to combat malaria. This enzyme is known to produce carbon monoxide (CO) and Soares and colleagues have shown that CO is crucial when it comes to protecting the mice against cerebral malaria.

The researchers hope that this insight will lead to new treatment options. ’Having established that the salutary effect of the sickle cell trait, which confers natural protection against malaria in millions of individuals, acts by avoiding the toxic effect of free haem, the next step becomes to understand how best to target free haem for therapeutic purposes,’ Soares told Chemistry World. ’While there are probably many ways to do so, we favour the use of a natural haem chelator/scavenger called haemopexin and are conducting studies to assess whether administration of haemopexin can achieve this goal.’

Nuno Arantes-Oliveira, chief executive of the company Alfama, which develops carbon monoxide therapeutics, praised the work: ’The results are very exciting and consistent with what others had shown before. They confirm the broad therapeutic potential of carbon monoxide, and further support the relevance and need for drugs that use this gaseous mediator as their active principle.’

Rui Wang from Lakehead University, Canada, also welcomed the results as a game-changing achievement. Looking forward, he speculated that ’other  gasotransmitters, NO and H2S, may have the same or even better therapeutical value in this regard. NO can form nitroxyhaemoglobin and H2S can form sulfhaemoglobin. Both of them would limit the release of free haem. I would not be surprised to see the NO- or H2S-based intervention with malaria soon.’