Stopping chemical dye waste from polluting rivers and waterways could be much easier in future, thanks to a cheap and recyclable metal oxide cleaning system developed by researchers in the US and China.

The process uses a novel nanostructured material that can suck dye molecules out of wastewater like a sponge. Made from nickel oxide, it can then be heated in an oven to burn off the dye molecules - allowing the material to be reused.

’In China, about 1.6 billion tons of dye-containing wastewater is produced every year, but only a small proportion of this is recycled,’ says Juncheng Hu, who worked on the Chinese side of the project at the South-Central University for Nationalities in Wuhan.

Toxic chemical dyes are frequently used in the textile, printing and paper industries - and conventional processes for cleaning up wastewater involve filtration with activated carbon. Unfortunately, this carbon can only be used once - so it is commonly disposed of in landfills. 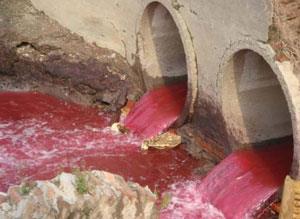 ’Our new process can absorb nearly as much dye as activated carbon - but the advantage is that the dyes are destroyed by simple heating - so the material can be recycled,’ says Ryan Richards, who led the team at the Colorado School of Mines in Colorado, US.

The secret lies in the nanostructure of the nickel oxide, which is made into tiny nanoplates only a few nanometres thin. ’The plates have a 111 surface configuration,’ explains Richards, ’which means they have a relatively high surface area and are completely polar - ideal for absorbing large conjugated dye molecules.’

The nickel oxide material was tested on three common dyes: congo red, fuchsin red and brilliant red X-3B - and the team found that it could remove up to 80 per cent of the dye at room temperature. To combust the dyes and use the nanomaterial again, it was heated to 500?C in an oven.

Since the original work, the team have already begun to optimise the process. ’We have found that using magnesium works even better than nickel,’ Richards told Chemistry World, ’and we have already submitted another paper with the improved results.’

With low production costs and high recyclability, the team are confident that their materials are not only promising for cleaning up areas affected by dye pollution - but could also be used to filter other harmful chemicals in wastewater streams, such as heavy metal ions or chemical war agents.

’The method seems promising,’ says Stephanie Brock at Wayne State University in Detroit, US. ’I am impressed by the fact that the material shows essentially equal capacity once regenerated.’

But there will need to be further investigations before it can be put to use, she adds. For example, ensuring that the material can endure many cycles of soaking and heating will be crucial. ’Another interesting question is what the decomposition products of the combustion are - as secondary pollution could be of concern,’ Brock told Chemistry World.