Golden orb spiders ward off ant invasion by spinning silk that contains a chemical deterrent, according to a study by Singaporean and Australian researchers. The work helps solve the puzzle of why ants, despite being formidable predators, are rarely seen on the webs of spiders and could possibly aid the design of insect repellents. 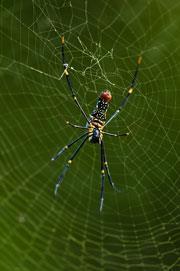 The team discovered that a pyrrolidine alkaloid, 2-pyrrolidinone, is present on the silk of the orb web spider Nephila antipodiana and demonstrated that it deters workers of three species of ant. Such compounds are commonly employed as chemical defence mechanisms in many species of ant, moth and caterpillar, but this is the first time spiders have been found to be using it.

’Although many animals utilise chemical defences against natural enemies, this work is unusual for two reasons,’ says Mark Elgar at the University of Melbourne who conducted the study with colleagues at the National University of Singapore. ’First, no one had really thought of spiders being potentially at risk of attack from ants and second, no one had investigated how individuals adopted a particular chemical defence as they grew older, in direct response to the risk of attack by enemies.’

Using gas chromatography-mass spectrometry, they found that the chemical is only present on silk threads produced by adult and large juveniles, and absent on threads produced by small juveniles. The team suggest this is because the thinner silk of juveniles is insufficient to allow ants to traverse, thereby supporting the idea that 2-pyrrolidine is produced by older spiders as an adaptive response to the threat of natural enemies.

In order to observe how the chemical affected ant behaviour, the team set up experiments that involved ants having to cross three silk bridges - one coated with 2-pyrrolidine, one without, and a natural control - to reach a food reward. The team saw that ants frequently crossed threads without 2-pyrrolidine, but rapidly retreated from threads containing the chemical.

’Ants run freely through most houses in Australia and elsewhere in the world and its pretty pointless trying to eliminate the colony in order to control them,’ says Elgar. ’However, making an area such as a kitchen bench inaccessible by using a repellent may be more effective.’

’I frankly had never thought about the fact that we never see ants on the webs of spiders,’ comments Randy Lewis who investigates spider silk at the University of Wyoming in Laramie, US. ’The most interesting aspect of this paper is the use of a fairly simple chemical as an ant repellent. From the spider silk perspective it probably is not going to have a major impact - it will be more important for the ecological study of spiders.’