We have all heard of psychologists training mice to solve mazes, but researchers at Northwestern University in Illinois, US, have found that molecules can do the same trick. 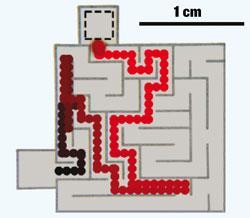 Molecules can solve simple mazes using only a pH gradient

The team, led by Bartosz Grzybowski, made a microfluidic maze, filled it with aqueous sodium hydroxide solution and then added a blob of agarose gel infused with hydrochloric acid at the exit of the maze. As the HCl diffuses out it creates a pH gradient along the paths of the maze.

When the team put a droplet of dichloromethane or mineral oil containing a surfactant (2-hexyldecanoic acid) and a red dye at the entrance, they were able to track its progress through the paths of the maze as it cruised along the pH gradient - driven by surface tension and acid-base interactions on the droplet surface.

The droplets did occasionally go astray, with dichloromethane droplets moving faster but making more errors, while mineral oil droplets move more slowly and accurately. The droplets always end up finding the shortest path to the exit, since this has the steepest pH gradient.

As well as solving simple maze problems, the work (published in the Journal of the American Chemical Society  , DOI: 10.1021/ja9076793) could be used in the design of microfluidic devices, especially if it can be extended to make use of other chemical gradients as the driving force.

Plans to introduce a personal carbon tax in France have been stalled by six months, after a constitutional court intervened two days before the scheme was due to start on 1 January 2010.

The tax, to be set initially at

On 30 December 2009, the French Constitutional Council ruled that the taxes were unfair because more than 1000 of the country’s top polluters would be exempt and the burden of reducing carbon emissions would be shifted unfairly onto the minority.

Speaking on 6 January, French president Nicolas Sarkozy said that the scheme would now be revised before coming into force on 1 July.

US researchers have succeeded in making two molecules react both efficiently and selectively inside live mice - with no apparent toxic effects.

The team, led by Pamela Chang at the University of California, Berkeley, used copper-free azide-alkyne cycloaddition click chemistry to attach chemical tags to complex sugar molecules - glycans - in the cells of the mice, which means that the synthesis of these sugars in a living animal can now be monitored. The researchers hope that observing this process will give scientists new insights into the role that the sugars play in many cellular processes such as the spread of cancer.

Current technologies for detecting glycans are not suitable for use in living animals. This work is reported in the Proceedings of the National Academy of Sciences   (DOI: 10.1073/pnas.0911116107).

Dismissed drugs adviser David Nutt has carried out his threat to set up an independent drugs advisory council to rival the UK government’s Advisory Council on the Misuse of Drugs (ACMD), from which he was unceremoniously sacked in November (see Chemistry World, December 2009, p10).

The new Independent Scientific Committee on Drugs held its first meeting on 14 January and Nutt has pledged that it will provide independent scientific advice about the safety of drugs, focusing firstly on ketamine and not-yet-banned ’legal highs’ such as mephedrone and other cathinones.

Meanwhile, pharmacologist Leslie Iversen has taken temporary helm of the ACMD, responsible for steering the committee through the storm that has arisen over Nutt’s dismissal, along with continuing to provide independent drugs advice to government.

Chemists have shown that the current running through a transistor made of a single molecule can be regulated by tweaking its molecular orbital energies.

The team, from the Gwangju Institute of Science and Technology, South Korea, and Yale University, US, sandwiched dithiol molecules between the ends of fractured gold nanowire contacts and used a battery of spectroscopic techniques to prove that their devices were true single molecule transistors.

Another inquiry into UK funding cuts

The new inquiry will be looking at a number of areas including the processes used to decide which part of the science budget is cut and the evidence available on the effectiveness of estimating the economic impact of research.

See the latest UK science budget cuts, and up-to-date information on plans to use economic impact to aid funding decisions.

US target chemicals for regulation 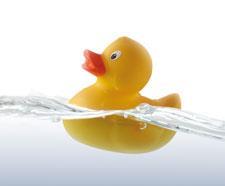 Phthalates, used in toys, have been named ’chemicals of concern’

The US Environmental Protection Agency (EPA) has announced that it has established, for the first time, a ’chemicals of concern’ list. It has also unveiled the first two groups of toxic chemicals to be added: phthalates (used as plasticisers in a range of applications including children’s toys) and the flame retardants polybrominated diphenyl ethers (PBDEs).

New, stronger legislation to limit the use of these chemicals in the US will now be considered - some of them are already restricted in parts of the country.

In the 30 December announcement, EPA head Lisa Jackson said that action will also to be taken on two other groups of chemicals - perfluorinated chemicals (PFCs) and short-chained chlorinated paraffins (SCCP) - through a different legislative route.

If chemical companies have proof that any of the chemicals listed do not pose an unreasonable risk, they have been invited to share their evidence with the EPA.

3D nanoimaging in a single shot

A quick and easy way to take 3D images at the nanoscale with a single measurement has been developed by US scientists.

Typically, 3D images are constructed in two ways. One is by rotating the sample to take 2D pictures from many different angles - such as in x-ray crystallography - and the other is to take many planar slices and combine them together, such as in confocal microscopy. This is the first time that 3D pictures have been taken in a single snapshot.

The method used by the University of California in Los Angeles’ team employs a type of x-ray diffraction microscopy - where a single beam of x-rays is fired at the target. A snapshot of these x-rays as they bounce back off the object is then taken using a charge-coupled device - similar to those found in modern cameras and the image reconstructed using computer algorithms.

Cosmologists have detected the first tantalising evidence of dark matter in the form of weakly interacting massive particles (Wimps). The two events were detected in crystals of silicon and germanium deep underground at the Cryogenic Dark Matter Search II (CDMSII) project in Soudan, Minnesota, US.

Dark matter is the mysterious, invisible stuff that is proposed to make up the ’missing’ mass of the universe. However, its very nature means it is almost impossible to detect. The two events at CDMSII have only a 75 per cent chance of actually being Wimps rather than false readings coming from stray radiation.

This is not enough to convince the community yet, but is an exciting hint that future, more sensitive facilities could pin down the elusive particles.