Night of the living surfaces 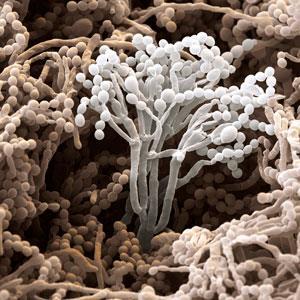 Would you go to a hospital with fungi growing on all the surfaces? Researchers from ETH Zurich, Switzerland, have developed a film that contains penicillin-releasing fungi, which could cover work surfaces in hospitals, food preparation areas or wherever microbial contamination must be avoided.

This ‘living surface’ could mark a sea change away from preloaded chemical-based materials, which slowly release an anti-bacterial chemical but eventually run out. The fungus, Penicillium chrysogenum, is used to create the living surface and it can produce penicillin when it is fed, even turning crumbs and other food spillages into an antibiotic. The idea is that anywhere on the surface where bacteria can eke out a living, the fungus can grow too, producing antibiotics to sterilise the surface.

Wendelin Stark, who led the research, drew inspiration from the role that bacteria and fungi play in preserving food. ‘If you buy a piece of cheese, it is milk that has been deliberately colonised with certain types of bacteria and fungi, which in principle is a deal that we have with these bacteria and fungi – we give them the milk, they colonise it and they create flavour but they also store the stuff for us.'

The film’s top layer has 400nm sized pores that keep the fungi in place but allow small molecules, like nutrients or antibiotics, to pass through. This has built on previous work from the group where they created a self-cleaning fungal film. In this film, the fungi would eat food spillages, breaking it down and cleaning the surface in the process. Now, by using a different strain of fungus, the food can be used to make antibiotics. ‘If there is a possibility [for micro-organisms] to grow, we want, in principle, something to grow that we know will not do us any harm,’ says Stark, ‘plus we also want it to defend the territory for us.’

Comparing it with standard anti-bacterial surfaces, Gleb Sukhorukov, from Queen Mary, University of London, UK, commented: ‘It’s much less robust than a chemical treatment and release, but the breakthrough is that it is renewable. They just need to supply nutrients.’

Sergiy Minko, from Clarkson University, US, suggested that the toughness of the fungi would need to be investigated: ‘Maybe the problem with the system is long term stability – that they cannot survive for a long period of time in this artificial environment.’

One issue is that penicillin is only effective against Gram-positive bacteria, and even those bacteria may develop resistance. However, Stark speculates on the evolutionary power of a living surface: ‘We have a microorganism that has evolved to fight bacterial contamination and other fungi, even under very complex settings. So it probably can adapt. There’s going to be very interesting research opportunities to find out if an adapting material, a material that has evolutionary properties, like the one we have made, if it can circumvent the resistance problem.’