Nitric oxide has been directly linked to extended life in roundworms, but any connection to human biology is unclear

Since 2005, a controversy has been raging about the role of nitric oxide (NO) in increasing the lifespan of various organisms. Now, US researchers may have direct evidence for NO’s apparent special powers, at least in the nematode model organism Caenorhabditis elegans. 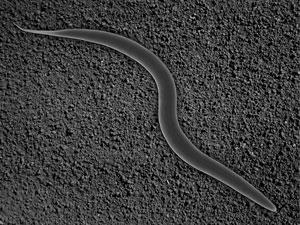 Worms deprived of their NO source lived shorter lives than normal

Although an extremely toxic gas, even at concentrations as low as 80ppm, dissolved NO performs crucial signalling roles in the human body. It dilates blood vessels, controls hair growth and is involved in penile erection. The immune system uses NO as a signalling molecule, and, as one of the few free radicals present in our body, it also deploys it to kill bacteria. The 1998 Nobel prize in physiology or medicine was given to researchers for figuring out how this gas worked in the body.

But the longevity debate was started by a 2005 Science paper by Enzo Nisoli and colleagues at Milan University. They reported that organisms – including yeasts and mice – on low calorie diets increased their production of NO.1 This kind of calorie restriction had already been shown to extend life above the average. Nisoli’s team’s claim was that, because NO plays such an important role in the body, its production in a calorie restricted organism may indicate that NO was involved in the lifespan extension effect in mammals.

But this claim needed to be backed by direct evidence. Now Ivan Gusarov and colleagues at New York University may have found that evidence. Their work involved a roundworm called C. elegans, which is frequently used in lab studies. ‘C. elegans happens to lack the ability to produce its own NO. But given the molecule’s critical role, the animal must have a way of obtaining NO’, says Gusarov. If somehow this way of obtaining NO was discovered and stopped, then C. elegans might not live as long as it does normally, which is about two weeks.

C. elegans’s non-lab diet consists of decomposing plant material that commonly contains Bacillus subtilis, which along with other soil bacteria has the ability to make NO. From animal tissues, it was clear that NO can pass through multiple cells and do its job at distant sites. Gusarov thought that perhaps by consuming NO-producing bacteria, C. elegans gets its supply of NO for free and, perhaps, that helps it live longer.

That is indeed what happens in the new study.2 If C. elegans is fed B. subtilis that has been genetically manipulated to not produce any NO, then the worms’ lifespan is reduced by 15%. When the team supplied gaseous NO to the worms that were being fed NO-free bacteria, the lifespan jumped back to normal. This indicates that it was the lack of NO that reduced the lifespan in the previous experiment.

Just to be sure that it was the bacterial NO that was leading to an extended lifespan, the researchers used a sensor that fluoresces when it detects NO. For added control, the team used E. coli that had been engineered to produce NO, which it normally cannot. C. elegans that consumed the modified E. coli had glowing guts, proving that the NO was produced by the bacteria inside the worm.

But is that really life extension? In the wild, if feasting on NO-producing bacteria makes C. elegans live longer, then it might evolve to seek and save such bacteria in its gut. ‘That might be true, but we don’t know,’ says Gusarov. ‘Some people are studying the [gut bacteria] of C. elegans and maybe they will find an answer.’

Nisoli is impressed by Gusarov’s work. ‘The methodology used is exceptionally elegant,’ he says.  While the results about NO’s ability to extend lifespan are restricted to the C. elegans for now, Nisoli notes, ‘Nutraceuticals’ approach to extending lifespan in humans is being investigated with great interest.’