Carbon dioxide emissions from power plants to fall by 32% by 2030, but the legislation faces opposition from the chemical industry 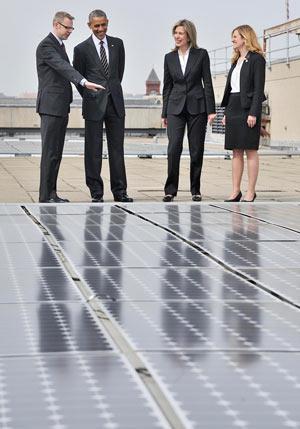 President Obama's clean power plan is not popular with everyone

The first ever US standards to limit carbon pollution from power plants have been established under the Obama administration’s new Clean Power Plan. Announced on 3 August, the final version of the rule has met with anger from industry, as well as from President Obama’s political opponents.

The American Chemistry Council (ACC) has expressed concern that the plan might harm growth and job creation in the US chemical sector by raising costs for businesses and consumers. The ACC plans to conduct an in-depth review of the new rule, but the organisation says it continues to question whether the US Environmental Protection Agency (EPA) has the legal authority to ‘fundamentally change and regulate our nation’s electricity system’.

The final Clean Power Plan sets national standards to reduce carbon dioxide emissions from the power sector by 32% from 2005 levels by 2030. It will allow states to develop tailored plans to meet the goals. Although state plans are due in September 2016, they can make an initial submission and request extensions of up to two years. The White House explained that the emission reductions are phased in on a gradual ‘glide path’ to 2030.

Overall, the White House says the new plan will stop the emission of 789 million tonnes of carbon dioxide, and it estimates that the new rule has public health and climate benefits worth between $34 billion (£22 billion) and $54 billion per year by 2030. These financial benefits far outweigh the $8.4 billion in costs associated with the plan, the administration says.

In announcing the final rule, Obama noted that US power plants are currently responsible for about a third of US carbon pollution. ‘That pollution contributes to climate change, which degrades the air our kids breathe. But there have never been federal limits on the amount of carbon that power plants can dump into the air,’ the president said.

Obama noted that the US government limits the amount of toxic substances such as mercury, sulfur and arsenic entering the environment, and he expressed frustration that ‘existing power plants can still dump unlimited amounts of harmful carbon pollution into the air’.

Joining the ACC to criticise the final power plant rule is the American Petroleum Institute (API), which said the plan imposes unnecessary costs on states and US consumers, while overlooking natural gas’s potential to help cut emissions. The API also believes that the rule oversteps the EPA’s authority.

Similar concerns were echoed by key Republicans in Congress, including Senate majority leader Mitch McConnell and Jim Inhofe, who chairs the Senate environment and public works committee. McConnell warned that the new rule is projected to cost billions and threatens to ship US jobs overseas. Inhofe said it ‘represents a triumph of blind ideology over sound policy and honest compassion’. He added that the Senate, under a Republican majority, is ‘ready to push back’ on these regulations.

On 5 August, 16 states petitioned the EPA to put the rule on hold. ‘This request is a necessary first step and prerequisite to confronting this illegal power grab by the Obama administration and EPA,’ said West Virginia attorney general Patrick Morrisey, who is leading the campaign against the rule.

David Doniger, who directs the Natural Resources Defense Council’s clean air programme, said the plan gives American industry ‘huge incentives’ to profit from industrial electricity efficiency, including combined heat and power. While Dallas Burtraw, an economist with Resources for the Future in Washington, DC, said there likely won’t be a noticeable rate change in electricity as a consequence of this rule. Although electricity rates will increase in states where coal is primarily used for electricity generation, he said those states typically already have relatively low electricity prices.

‘This rule is imposing a uniform standard across all states that closes the gap between those leadership states and the others that have yet to take steps to mitigate their carbon emissions,’ Burtraw tells Chemistry World. ‘Because it is such a flexible rule, it doesn’t require any plant to shut down,’ he says. ‘Every plant has multiple ways in which they can comply.’