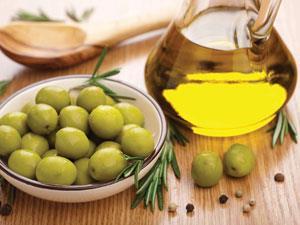 Oleic acid is found in olives and olive oil

Spanish scientists say increasing the amount of olive oil in your diet could reduce your risk of developing metabolic syndrome and type 2 diabetes.

Sergio Lopez and co-workers from the Institute of Fat in Seville studied the connection between different types of dietary fat and blood glucose control in humans with normal and high fasting triglycerides. They found that unlike other dietary fatty acids, oleic acid, which is found in olive oil, helps to regulate insulin secretion and minimise spikes in blood sugar levels after meals.

Insulin, a hormone produced by ß-cells in the pancreas, is released into the blood stream in response to elevated blood sugar levels after the ingestion of carbohydrate-containing foods. The effectiveness of cells to use insulin to reduce blood sugar levels is measured by postprandial insulin sensitivity.

The research showed that while saturated fatty acids such as palmitic acid, found in many common foods such as meat and dairy products, impaired postprandial ß-cell function and insulin sensitivity, oleic acid (a monounsaturated fatty acid) protected glycaemic control by optimising the pancreatic production of insulin and improving whole-body sugar use, leading to the immediate lowering of blood glucose levels after meals. The beneficial effect of oleic acid in promoting insulin sensitivity was highlighted, and it was found that high levels of palmitic acid increase the demand for insulin secretion and insulin resistance, a condition that is considered a predictor of ß-cell exhaustion and progression to diabetes in the long-term.

‘This is an interesting study that clearly shows the importance of the type of dietary fatty acids in determining the insulin requirements and the insulin sensitivity to regulate glycemia,’ explains Lucía Quevedo, an expert in dietary effects on insulin resistance from the National Polytechnic Institute in Mexico. The findings may be particularly beneficial to those who suffer from metabolic syndrome or type 2 diabetes, as elevated blood glucose levels and decreased insulin sensitivity are key features of these diseases.

Lopez’s team hope to further the work by gaining a ‘greater understanding of the postprandial phenomenon to develop better strategies for the prevention and management of metabolic diseases.’