One dimensional carbon chains get longer

Chemists have made the longest polyyne so far - linear chains of carbon atoms that resemble carbyne, an elusive form of one-dimensional carbon

Researchers in Canada have synthesised the longest polyyne to date - a linear chain of carbon atoms. Polyynes can act as a model for an elusive one-dimensional form of carbon, carbyne, which is proposed to exist in dust found between stars but has so far proved impossible to prepare in a well-defined form in the laboratory. Given the remarkable range of properties of other allotropes of carbon, including diamond, graphite and fullerenes, chemists believe that carbyne could also have unusual and potentially useful characteristics, for example as molecular wires for nanoscale electronics.

Wesley Chalifoux and Rik Tykwinski, of the University of Alberta in Edmonton, succeeded in making a polyyne consisting of 44 carbon atoms - the previous longest being 28 atoms.

’Polyynes are difficult to make because if you try to purify them they usually decompose into a some amorphous black goo which falls to the bottom of the flask,’ says Tykwinski, who is presently at the Friedrich Alexander University in Erlangen, Germany. 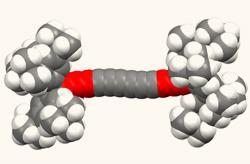 To make polyynes, chains of acetylenic units are bolted together. Chalifoux and Tykwinski used an especially bulky end group - consisting of three linked aromatic rings, each containing three butyl groups - on one side of their acetylenic precursors. When two of these semi-protected acetylenes link together, both ends of the resulting polyyne chain possess the stabilising end caps, allowing the molecule to be purified and characterised.

In this way, the researchers made a number of polyynes of differing length, with the longest containing 22 acetylene units, totalling 44 carbon atoms. ’We have shown how these longer chains can be made stable,’ says Tykwinski. ’This should now allow us to start examining the properties of these one-dimensional carbon chains in more detail.’ The researchers demonstrated that the polyyne - and thus presumably carbyne - has alternating single and triple bonds, something that was suspected but not verified until now.

Experts in the field are impressed by the work. Martin Bryce, of the University of Durham in the UK, says, ’This work opens up new possibilities for experimentally probing the extent of conjugation and the energy levels within long carbon chains. It will be fascinating to see if different end-groups can be used to tune the electronic properties of these polyynes, with a view to possible molecular electronics applications.’

John Gladysz, of Texas A&M University in the US, applauds the way that the team hit upon an effective capping group to stabilise the chains. ’This choice, which entails a triple benzylic system, is not so obvious because of the thermodynamically weaker terminal sp3-sp carbon bond and deserves kudos.’