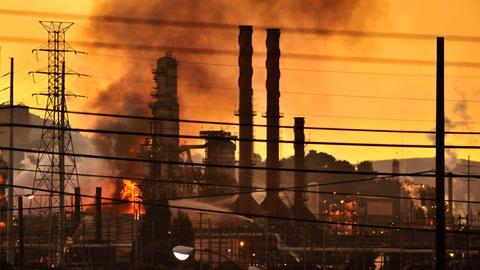 US chemistry organisations and the chemical industry have come together to oppose President Trump’s elimination of the only agency charged with carrying out independent investigations of industrial chemical accidents.

In his budget blueprint for 2018, released earlier this month, Trump proposed ending funding for the $11 million (£9 million) Chemical Safety Board (CSB) that has run for almost two decades.

The CSB’s chairwoman, Vanessa Sutherland, called the attempt to eliminate the agency ‘an attack on the safety and security of America’s workers’, and organisations like the American Chemical Society (ACS) were severely critical of the White House plan. ‘It is a short-sighted proposal,’ warns ACS spokesperson Glenn Ruskin. ‘The CSB was created through the Clean Air amendments of 1990 and it really fills a vital role in promoting safety in the entire chemistry enterprise – industry, academe and government.’

Ruskin says the ‘tremendous benefit’ that the CSB’s activities offer for the public and chemistry far exceeds its modest funding. ‘The return on investment is many fold more than its small budget,’ he tells Chemistry World. It does not appear that the Trump administration has identified another agency or committee that can assume the CSB’s roles and tasks, Ruskin states.

In his so-called ‘skinny budget’, Trump proposes to do away with 19 agencies, but it appears that the CSB is the only one with a safety mandate.

Businesses that employ hazardous materials face potentially catastrophic accidents, but often lack the in-house expertise to investigate and might be reticent to share lessons learned owing to liability concerns, according to the American Institute of Chemical Engineers (AIChE). ‘Recognising these issues, Congress created the Chemical Safety Board so we can benefit from on-going expertise to investigate major accidents and disseminate best practices and technologies to minimise catastrophic incidents,’ AIChE explained. ‘We believe that this is a competence that must be maintained and a need that we must continue to meet.’

Michael Wright, the United Steelworkers’ director of health, safety and environment, calls the White House plan to defund the CSB ‘remarkably stupid’. Wright emphasises that the agency is charged with helping to prevent major chemical accidents, and estimates that the cost of just one such accident is ‘equal to the board’s entire budget over its entire history – probably 10 times over’.

Christine Todd Whitman, who served as chief of the US Environmental Protection Agency under former Republican president George W Bush, agrees that the CSB is very good value for money and strongly opposes its elimination. ‘I don’t understand the reason behind it, except the chemical industry does not like to have oversight,’ Whitman remarks. ‘This is the chemical industry winning another battle.’

However, the National Association of Chemical Distributors (NACD) expressed ‘serious concerns’ about the proposal. The lobby group said it supports the CSB and its work, and will be asking Congress to continue funding it.

The American Chemistry Council declined to comment on the future of the CSB, but said that one of its top priorities is ensuring the safe development, use and disposal of chemicals in commerce.

Trump’s budget blueprint will be fleshed out when its final version is released in April. It will have to be approved by both chambers of Congress before the president can enact it into law. Ultimately, there may be little appetite on Capitol Hill to shut down, or severely curtail funding for this small but visible safety agency.

Since its inception, the CSB has made nearly 800 safety recommendations to industry, government agencies, labour unions and others. The agency has also issued 90 reports detailing the conditions that led to major chemical incidents, and making distinct recommendations on how to prevent similar incidents.

CSB investigations have included the Deepwater Horizon oil rig explosion in April 2010 that killed 11 people and caused a devastating oil spill in the Gulf of Mexico, the massive chemical spill in West Virginia that contaminated the tap water of 300,000 people in January 2014 and the explosion at West Fertilizer chemical plant in Texas later that year that killed 15 people and injured more than 200.

While the CSB has had some problems in recent years, the NACD says the agency is now back on course under Sutherland. The agency has now concluded a number of long-running investigations that many say should have been closed years ago and is now conducting investigations more quickly, according to the NACD.

In 2015, the CSB was accused of inaction amid internal conflict after its chairman Rafael Moure-Eraso resigned in 2015. He had faced growing congressional and White House pressure following allegations of mismanagement and misuse of private email. In addition, CSB managing director Daniel Horowitz has been on administrative leave since mid-2015 pending an internal investigation. The probe has focused on activities raised by a House Republican committee staff report, released back in June 2014.