Ozone found in indoor environments reacts with human skin, potentially producing chemicals that irritate the skin and lungs, according to researchers in Austria and the US. The study, which is the first of its kind to be performed with humans, highlights the limitations of current methods used to assess indoor air quality.

Trioxygen, or ozone, is present in low levels throughout the Earth’s atmosphere. Ozone can find its way indoors, although it is also emitted by many devices including photocopiers and air cleaners. For this reason, past studies have investigated the effect of ozone in the office environment. However, these have all focused on ozone’s chemistry with materials and consumer products, and not on its chemistry with humans.

Now, Armin Wisthaler of the Leopold-Franzens University of Innsbruck, Austria, and Charles Weschler of Rutgers University in New Jersey, US, have performed a study of ozone with human occupants in an office environment. They used a technique called proton transfer reaction-mass spectrometry (PTR-MS), which can monitor volatile organic compounds (VOCs) in real time. It works by sending a sample of air through a tube of H3O+ ions, which donate protons to the VOCs, leaving them ionised. With input of standard reaction-rate constants, PTR-MS can calculate each VOC’s original concentration.

Wisthaler and Weschler performed tests with two human subjects in a 28.5m3 chamber, designed to simulate an office, with normal ozone levels of about 15 parts per billion. They discovered a range of VOCs, including three types of dicarbonyls and two alpha-hydroxy ketones which have not previously been reported in studies of air pollution. Past research suggests that some of the more volatile of these compounds might irritate the lungs, while some of the less volatile compounds might irritate the skin. 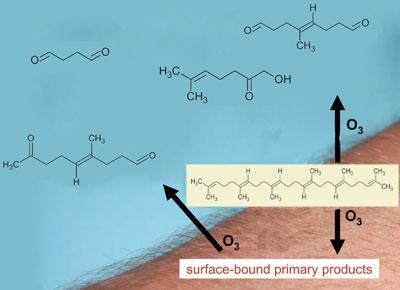 The newly identified compounds are likely to be produced when the ozone reacts with squalene, an organic compound, and unsaturated fatty acids, both of which are found on the human skin. The study suggested that a single human can remove up to a quarter of all ozone in a similar-sized office via this reaction.

However, the study may also have implications for methods of outdoor air-pollution analysis. Squalene and fatty acids are also found on various outdoor surfaces, including plants, buildings and the sea surface, and so have the potential to react with ozone here too. ’To a large extent, the resultant products are likely to have been overlooked in surveys of outdoor pollutants for the same reasons that they have been overlooked in indoor pollutants - analytical methods have been used that were not suited to the detection of easily oxidised or highly functionalised compounds,’ the researchers note.