Look out, Suzuki - Canadian chemists have successfully joined up simple benzene ring-like aromatics without any pre-activation

Look out Suzuki - Canadian chemists have successfully joined up simple benzene ring-like aromatics without any pre-activation.

When you need a new carbon-carbon bond - the central reaction of organic synthesis - most chemists will head straight to the palladium shelf. Linking together two aromatic compounds to make a biaryl is one such reaction where a dash of your favourite palladium catalyst can work like a charm.

But both aromatics usually need pre-activation, requiring extra synthetic steps. Until now, that is - David Stuart and Keith Fagnou at the University of Ottawa, have shown aromatics can be selectively coupled without any pre-activation. Crucially, the reaction only gives cross-coupled products; neither of the starting aromatics reacts with itself (homo-coupling). ’Even one year ago, I was telling my students I didn’t know how we would access this,’ said Fagnou. ’We’ve achieved this goal much quicker than I expected.’

’The most common way to make biaryls is the Suzuki reaction [the cross-coupling of an aryl halide with an aryl boronic acid],’ said Fagnou. But there is much waste involved in the extra reactions needed to put the activating boron and halide groups in, he said. Biaryls are ubiquitous intermediates for pharmaceuticals, and in devices like LEDs and liquid crystals. 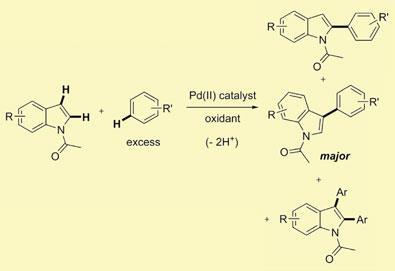 Biaryls can now be made from unactivated starting materials

Too rich? Too acidic?

Palladium catalyses new carbon-carbon bonds by first grabbing one aryl molecule, and then grabbing the second, before releasing the two as a single biaryl. Fagnou ensured cross-coupling would take place, rather than homo-coupling, by choosing aromatics with different levels of electron richness and C-H acidity - an indole and a simple arene like benzene. While the mechanism is not yet nailed down, the palladium clearly undergoes a complete switch in selectivity half-way through the cycle; once it has picked up one aromatic, it will then only pick up a molecule of the other.

Martin Wills, who studies catalysis at the University of Warwick, UK, said while the choice of coupling reagents is currently restricted, the work proves it is possible to directly couple simple aromatics, and should trigger more studies to extend the reaction scope.

’Suzuki coupling is an awesome reaction, and I don’t think it will ever go away,’ said Fagnou. ’But I hope that in some cases, coupling of simple aromatics will become the reaction of choice. Suzuki chemistry is the fruit of 30 years labour, and I think it will take an equivalent amount of work until this new reaction will be a front-line reaction,’ he said