Patching up patients with a heart of gold

An engineered ’patch’ of cells could help heal hearts after a heart attack, but it is presently very difficult to grow the cells in such a way that they communicate with each other. Now, researchers have used gold nanowires to boost the propagation of electrical signals in cardiac patches, significantly increasing their therapeutic value.

So far, lab tests have seeded animal cells onto three-dimensional porous scaffolds made of biological polymers, such as alginate, or synthetic polymers, such as poly(lactic acid). But while these scaffolds help cells organise, the tissues conduct electrical signals poorly.

’Electrical current does not pass well from cell to cell, especially between cells in different pores separated by the walls of the scaffold,’ explains team leader Daniel Kohane of Harvard Medical School. This poor conductivity limits the ability of the patch to contract as the heart beats. Efficient propagation of electrical signals is critical for the engineered patches to function properly. 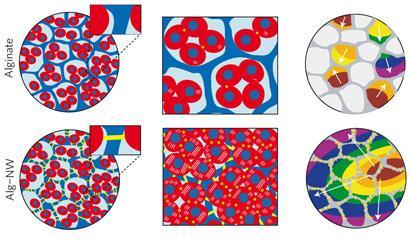 The team from Harvard Medical School and the Massachusetts Institute of Technology embedded gold nanowires within alginate scaffolds. The nanowires were 1mm long (diameter 30nm), longer than the average thickness of the alginate pore wall (500 nm) so they could interact with cells on both sides. The structure was then seeded with cells from rat hearts.

The nanowires bridge the pores of the alginate and improve electrical communication between adjacent cardiac cells, Kohane says. ’We looked at the propagation of calcium flux across the tissue - a sign that cells are being electrically stimulated,’ he says. ’When we stimulated the patch with current, we saw calcium fluxes spread across the tissue in an organised manner. The gold wires allow current to go between pores, so cells can contract in unison.’

The team also found that tissues grown on the scaffolds were thicker and better aligned than those grown on pure alginate and they detected higher levels of the proteins involved in muscle contraction and electrical coupling. Kohane says: ’This may, in part, be a direct effect of nanostructures on tissues, and partly an effect of better electrical conductivity that enhances these features.’

Although it will be years before such a patch is tested in humans, doctors could ’stitch’ nanocomposite structures onto damaged areas, says Kohane. ’In time, the scaffold would degrade, leaving nanowires embedded within the engineered tissue.’

This work is highly novel, says Milica Radisic of the University of Toronto, Canada. ’They have overcome a critical limitation in cardiac tissue engineering: non-conductive substrates. As a result, this work promotes the assembly of heart tissue in vitro. In the short-term, I expect these scaffolds will enhance development of model systems, such as arrays of cardiac tissues for use in drug testing, for example.’