The pharmaceutical industry’s current drive to curb spending is helping to speed the adoption of green chemistry, say experts in the industry.

Faced with looming patent expiries of their big-selling blockbuster drugs, and a lack of candidates set to replace them, many companies in the industry are looking to dramatically cut their costs. But far from being driven off the agenda by core activities, the importance of green chemistry is growing in many companies.

’There’s clearly a lot more cost pressure in the pharmaceutical industry these days, especially as the cost of discovering and developing drugs continues to increase,’ Peter Dunn, green chemistry lead at Pfizer, told Chemistry World. ’But green chemistry offers significant cost advantages and hence is part of the solution to the problem.’

The savings come about because efficient syntheses that avoid exotic reagents, minimise energy use and replace organic solvents with water are invariably cheaper to perform. ’Even at lab scale, cost savings can be realised, and manufacturing scale process changes can save millions of dollars,’ says James Long, who’s also on Pfizer’s green chemistry team. 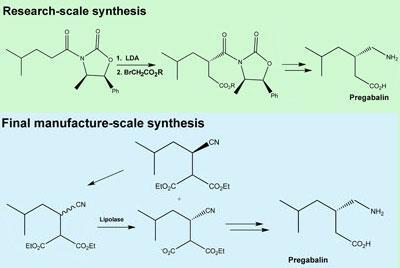 Pfizer is not alone in turning to green chemistry. In 2005, several firms, along with the American Chemical Society’s Green Chemistry Institute (GCI), established the GCI Pharmaceutical Roundtable, to promote the integration of green chemistry and green engineering in the industry. Nine companies - including Pfizer, Johnson & Johnson, AstraZeneca and GlaxoSmithKline (GSK) - are now roundtable members.

At GSK as at Pfizer, belt-tightening has led to an increased focus on green chemistry. ’Specifically for GSK, the appointment of Andrew Witty as CEO has shone a spotlight on manufacturing efficiencies, and green chemistry has received a great boost as a result,’ says David Constable, responsible for promoting sustainable practices in R&D and manufacturing through green chemistry and engineering at GSK. ’Going green is cost beneficial; it just has the perception that it is more expensive to do. In every case I know, the green option is the low cost option.’

"In every case I know, the green option is the low cost option" - David Constable

’The members of the GCI Pharmaceutical Roundtable have generally found that the green chemistry agenda is being supported at the highest levels of the company. Amongst these companies, I think the priority has risen,’ adds Constable. ’Because of the perception of "green" being more expensive, there may be those who think it needs to go down on the priority list. In my opinion, those that think this way do so at their own peril; these will be the companies that do not survive in the long term.’

A key aspect of any green chemistry programme is to minimise or eliminate the use of particularly harmful or hazardous chemicals. Solvents are a key priority as they are used in such bulk. Companies including GSK and Pfizer have developed tables which list undesirable solvents and suggest suitable replacements, and such programmes have cut by almost two thirds the amount of dichloromethane used at Pfizer’s three main research sites, while use of diisopropyl ether has been eliminated entirely. Similar tables of alternatives have been developed for common chemical transformations, such as the oxidation of alcohols to aldehydes.

It’s important to consider the green option throughout the drug development process, says GSK’s Richard Henderson. ’We try to get people think about what is the most efficient process throughout the lifecycle, so that it is already in a good state by the time it reaches manufacturing.’

"We try to get people think about what is the most efficient process throughout the lifecycle, so that it is already in a good state by the time it reaches manufacturing" - Richard Henderson

Research chemists are increasingly getting the message - and there have been some high profile successes. In 2006, Pfizer chemists won the Astra Zeneca green chemistry award for greening the synthesis of Pregabalin, a treatment for neuropathic pain launched in the US in 2005 and which earned the company $1.8 billion in sales in 2007. The atom-inefficient original synthesis used a chiral auxiliary to control the stereochemistry, but the final process used an enzyme instead, and the last three steps in the synthesis were adapted to be carried out in water. ’The success of this enzymatic reaction has really spurred our chemists to try lots of them, we’ve seen a real uptake in their usage,’ says Long.

The industry is also starting to analyse the green credentials of chemical feedstocks bought in from external suppliers - an important shift, given that increased outsourcing is another outcome of pharma’s cost-cutting drive. At the 2007 pharmaceutical roundtable meeting, members agreed to include outsourced feedstocks when calculating their total mass productivity - the number of kilograms of material used per kilogram of final product - as a metric to compare performance from company to company. ’This agreement forces us to engage with our suppliers, to come up with the best solution,’ says Henderson. ’The roundtable was set up to share best practice, but we’re also very competitive.’