China’s move to ban the distribution of free plastic bags and to curtail their manufacture has dealt a huge blow to the country’s plastics industry. 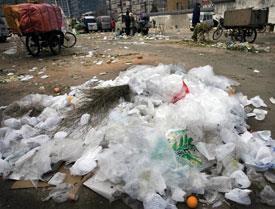 The State Council - China’s cabinet - has from 1 June banned shops from giving away free bags and prohibited the production or use of bags thinner than 0.025mm. Recently enacted national standards on plastic bags further stipulated that bags should be durable enough to last for at least a year.

China used 30 billion plastic bags last year and the ban has already had a big impact on many of the country’s 60,000 producers. Huaqiang Plastics, China’s largest plastic bag manufacturer, located in the central province of Henan, announced in late February that it would close, with the loss of thousands of jobs. Thousands of other smaller producers have also shut down or shifted to other businesses.

’The cost of producing thicker bags is not too high, but the no-free-bag policy is expected to dramatically cut demand,’ says Ma Zhanfeng, deputy secretary general of China Plastics Processing Industry Association. The new rules are forcing larger plastic bag manufacturers to shift to high-end products such as more environmentally friendly polypropylene-based bags as well as biodegradable bags made from starch, says Ma.