The warriors and horses of China’s terracotta army contain different pollen compositions, scientists have discovered, a finding which could help locate the long-sought kilns where the clay figures were made.

For over 2,200 years, a secret terracotta army of about 8,000 soldiers, 300 horses and 200 chariots has protected the hidden tomb of China’s first emperor, Qin Shihuang. Unearthed in 1974, the life-size statues are said to represent the pinnacle of achievement in ancient pottery, and archaeologists have been trying to solve the mystery of how and where they were produced.

’One way to study such problems is to figure out the origin of the soil that was used to make the terracotta,’ explained Hu Yaqin of the Institute of Botany, Chinese Academy of Sciences, in Beijing. Because soils from different regions are likely to contain distinct signatures of vegetation, Hu and her colleagues analysed pollen compositions in clay fragments and soil samples from the pit. 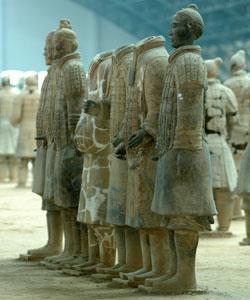 They crushed the terracotta fragments, digested the ground clay with acids, and spun the mix to separate the components. The resulting organic residue was mounted in glycerol and observed under a high-resolution microscope. The team recovered and identified 32 types of pollens. The pollen spectrum of terracotta horses, mostly from trees, is similar to that of the soil samples from the pit. By contrast, the pollens detected in terracotta warriors are mainly herbaceous.

The researchers suggest that the horses were made locally near the pits of the emperor’s mausoleum, whereas the soldiers were produced elsewhere. ’The horses have relatively fragile legs, which are prone to damage during transportation, and are also larger and heavier than the soldiers,’ says Hu. ’So it makes sense to produce the horses locally to minimise transport.’

This is the first time that pollens have been recovered from ancient pottery in this way. ’We may have opened a new door for uncovering the secret of the terracotta army,’ said Zhang Zhong-li, of the Museum of Terracotta Warriors and Horses of the Qin Shihuang Mausoleum in Xi’an, also an author of the study. Archaeologists have discovered the remains of several ancient kilns in the region, but it is difficult to determine whether they were used to make the terracotta. ’We might be able to get some clues by analysing pollen compositions of the soil in the kilns,’ said Zhang. The results are published in the Journal of Archaeological Science.

’This is a very interesting and innovative study,’ said Arlene Rosen of the Institute of Archaeology, University College London. However, the conclusion should be confirmed by a larger sample size, which is always tricky in archaeology, and by detailed chemical analysis of clay and soil sediments through X-ray fluorescence or infrared spectrography, she suggested.