Polymer side-chains on the slide

Stimuli-responsive polymers that change their behaviour in response to a trigger look set to become a little more sophisticated. Toshikazu Takata and colleagues at the Tokyo Institute of Technology, Japan, have developed a new breed of copolymer with a dynamic, controllable structure based on supramolecular materials known as rotaxanes.

In a simple rotaxane, a molecular ’axle’ is threaded through a macrocyclic molecular ’wheel’, before bulky capping groups are added which allow the axle to slide up and down, but not out of, the wheel. Takata has now shown how such structures can be converted into long polymer chains bearing dynamic side-chains. 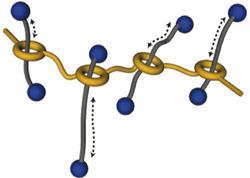 Polymers in which one material forms the backbone and another is used for the side chain are known as graft copolymers, and they have been used extensively to mix and match the properties of different polymer materials. The side-chain material modifies the properties of the backbone polymer, perhaps making it less brittle or more elastic.

What is unique about the rotaxane-based graft copolymer is that the side chains’ - the axles - positions aren’t fixed, but can move up and down, which should change the polymer’s properties. Over the past decade, many rotaxanes have been made in which the position of the axle within the wheel can be controlled, for example by using chemical additives or pH. ’We and other rotaxane chemists have already develop various switching systems - thus, we will be able to develop new polymer materials that change their physical properties according to the rotaxane switch,’ Takata says.

’I haven’t seen any grafting polymer like this in the past, where the side chains can slide up and down,’ says Greg Qiao, a polymer chemist at the University of Melbourne in Australia. ’They have clearly demonstrated how to make such a polymer, and the way they do it is really quite clever. This definitely gives you the potential to study a new type of polymer, which could possibly give you new properties.’

Takata and his team envisage many potential uses for their material. ’The best ideal system will be the fully mobile system where the graft chain moves from one end to the other in the ring unit with a certain, controlled motion,’ says Takata. ’If this control is achieved, there will be a variety of stimuli-responsive polymers and polymer materials that can be actually used,’ he adds. The researchers are looking into thermo-responsive polyrotaxanes, and molecular capsules that trap guest molecules such as drugs within the graft chains before releasing them on demand.