Potential catalysts in the grip of carbon pincers

Greener catalyst production could follow the development of unusually stable compounds containing uranium or early transition metals locked in a pincer-like grip, say UK researchers who have synthesised and characterised at least half a dozen such compounds. 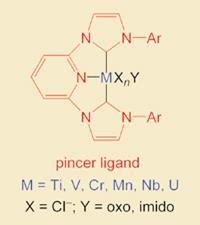 The compounds are held together with coordination bonds, which are formed when a group, or ligand, donates electrons to a transition metal.  The compounds, or complexes, are used as efficient and reliable catalysts in industrial processes that make carbon-carbon bonds. Research is now focussed on producing better catalysts, reducing the environmental impact of producing these catalysts, minimising the energy used and waste produced.

Andreas Danopoulos and colleagues at the University of Southampton approached the problem by creating the stable compound using a pincer-like structure that incorporates two carbenes and a pyridine.

Carbenes are reactive species containing divalent carbon atoms; they have spare electrons to donate, which makes them ideal for bonding with transition metals.  Using a ’hinge’ molecule (in this case, pyridine - another good donor) to link two carbenes makes a ligand that coordinates a metal as if it were being held by a pair of pincers, hence the description ’pincer’ ligand.

Danopoulos’ team made new pincer complexes by direct substitution of easily-exchangeable ligands with pincers and by further raising of the oxidation number of the metal of a newly-formed pincer complex.  For uranium in particular this is only the second reported example of a U(IV) N-heterocyclic carbene complex.

Although more investigations into the use of these ligands with different metals are needed, increasing the effectiveness of catalytic complexes could help to improve the general reputation that some heavy metals have acquired in the past.