US scientists have designed an ultra-thin, flexible battery with the highest charge capacity reported for thin film cells. The battery can also be charged at a lower voltage than lithium ion batteries.

Flexible batteries offer advantages over more rigid systems as they can be incorporated into many modern devices, from powering up limb prostheses to detection systems for cracks and strains in concrete structures, for example. But electrochemical energy sources for the batteries are plagued by toxicity, the risk of explosive flammability and physical bulkiness.

Daniel Lowy from FlexEl, a company in Maryland that develops rechargeable batteries made from thin films, and Martin Peckerar from the University of Maryland, and colleagues, have developed a thin galvanic cell that is safe to use and non-toxic because it doesn’t corrode in electrolyte media.

The team made the cathode by blending RuO2?nH2O nanoparticles and activated carbon with a supporting electrolyte made of zinc and ammonium chloride, and a perfluorinated polymer binder. The resulting paste was spread out on a flexible and conductive current collector (a graphite film). A thin zinc sheet served as the anode and the whole assembly was packaged between sheets of flexible plastic. 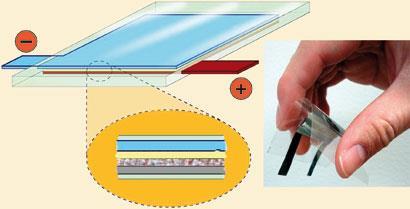 The flexible power source is made of a zinc anode on top of a RuO2.nH2O/activated carbon cathode surrounded by packaging and sealing materials

’While the usefulness of RuO2 as an electrode material in supercapacitors is well documented, its use in galvanic cells has almost been neglected because of its perceived high cost,’ says Lowy.

To test the corrosion resistance of the cell, the team used different electrolytes of varying pH. They found that using a moderately acidic electrolyte prevented the electrode materials and package sealing materials dissolving, while enabling the electroactive reactions to proceed close to equilibrium. When they tested the life cycle of the battery, they found that the cells undergo over 400 charge-discharge cycles. ’We can maintain up to 85 per cent of the capacity over 300 cycles. Over the next 100 cycles, the capacity decays gradually to 20 per cent of its initial value,’ says Lowy.

’The galvanic cell’s electrochemical performance exceeds that of lithium ion batteries,’ says Mojtaba Mirzaeian, an expert in electrochemical energy storage at the University of Strathclyde. He finds it interesting that using a ruthenium oxide-based cathode can be applied to developing a hybrid energy storage and power supply system.

’The mechanical flexibility and malleability of our cell will have a positive impact on miniaturisation. Imagine, for example, an ultra-thin battery moulded to the case of a laptop! Clearly, this will enable more room for the electronic payload,’ adds Lowy.