Prehistoric humans liked to spice up their lives

Our taste for spice goes way back into prehistory, research has shown. Traces of the pungent herb garlic mustard (Alliaria petiolata) were recovered from the cooking pots of hunter gatherers living along the shores of the Baltic Sea, around 6000 years ago, but spicy cuisine likely goes back much further, say some experts.

Microfossils of the mustard-flavoured seeds were recovered from unstructured carbonised deposits along with lipids. From these lipid deposits, the researchers surmise that the spice was added to flavour various foodstuffs. ‘What we have here is evidence of spice in a culinary context,’ says archaeologist Oliver Craig of the University of York, UK, ‘and these are definitely cooking pots.’

Ratios of carbon-12 to carbon-13 were studied to separate out marine and terrestrial deposits. The researchers also identified distinctive fatty acids, indicative of marine organisms, such as isoprenoid fatty acids. The analyses suggest the spice was used to add mustardy pungency to fish, shellfish and ruminants and perhaps to lightly flavour venison. 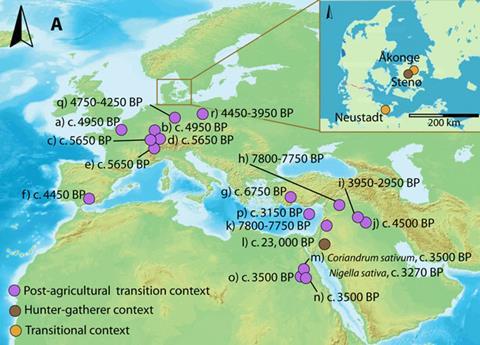 This is the first direct evidence for spicing up European prehistoric cuisine; the seeds have little nutrition value. The garlic mustard was identified because of distinctive rigid silica bodies that form when plants take silicic acids up from the soil. Researchers Hayley Saul at York University and Marco Madella at the Spanish National Research Council, Barcelona, compared the cooking pot phytoliths with over 120 plant species in a modern reference collection before concluding that they were from garlic mustard.

Bioarchaeologist Jessica Pearson at the University of Liverpool, UK, says archaeologists have carried around a distorted view of the use of plants in prehistory. ‘There has been a tendency in the study of ancient hunter-gatherer diets to assume that before farming, all food was simply a source of fuel and there was no preference or taste or perhaps even a form of social identity attached to the consumption of some plants,’ Pearson says. ‘This is in part due to the poor preservation of plant remains in the earlier Palaeolithic and Mesolithic periods, which prevents their recovery and identification.’

‘In reality, the charred plant assemblages from early Neolithic and later sites contain large numbers of plant remains that would not be categorised as crops or standard sources of food and which we are uncertain as to how they were used,’ Pearson adds.

She says it’s important to emphasize the relatively low abundance of herbs and spices. ‘Even in our modern diet,’ she says, ‘the weight of plant material that provides some form of flavouring in our food compared to that from all the other plants we eat is vanishingly small. This simply serves to make such discovery and identification all the more difficult, but also equally important when they come to light.’