Scientists are a step closer to producing soft machines that are efficient and long-lasting enough for practical applications. 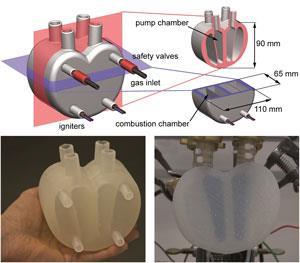 Engines and other machinery are currently composed of rigid parts that bear considerable forces and degrade over time. They are also limited to moving in a certain direction or around a certain axis. In nature many mechanical processes are carried out using soft materials that are nevertheless highly durable, efficient and capable of deforming and returning to their original shape in complex ways, for example the heart.

Previous studies have toyed with soft pumping systems powered by combustion, but only systems capable of a few pumping repetitions had been produced, until now. The soft pump from Wendelin Stark’s team at ETH Zurich in Switzerland is capable of at least 10,000 repetitions.

‘Pumping is omnipresent, and today, with current hard material-based pumps, you always run into trouble when conveying particle loaded liquids. Moreover, seals are always a weak point. In our soft pump, there is no sealing between the “outside world” and the liquid side!’ says Stark.

The design is similar to the human heart. It consists of four silicone chambers; the outer two are combustion chambers that are separated from the inner two liquid chambers by a soft barrier. When combustion occurs the outer chambers expand causing the barrier to squeeze liquid out of the inner chambers into the tubes.

Robert Shepherd, a soft robotics expert at Cornell University in the US, says the work is remarkable and is a more complex system than that recently made by his group, as well as operating at lower frequencies, which is critical for pumping liquid. ‘This is further evidence that combustion is a viable mechanism for powering soft machines, the community just needs to improve the efficiency.’

Indeed Stark’s device provided a high amount of energy but energy efficiency was poor, with a lot lost as heat. The team now intend to design more complicated systems that are capable of operating at higher pressures.