World's biggest supplier to re-use all its waste, thanks to humble wire mesh rings

The world’s biggest supplier of radiolabelled molecules has developed a way to turn all the radioactive tritium waste it produces back into material pure enough to be used again.

GE Healthcare’s radiochemicals group, based at Whitchurch near Cardiff, UK, churns out around a quarter of all labelled drugs used by the pharmaceutical industry.

In the process, the firm produces significant streams of radioactive waste, much of which, to date, has simply been stockpiled. Now the firm has developed an efficient way of recycling all the tritium waste it produces - recapturing the radioactive hydrogen isotope in a form that is 99 per cent pure.

Tritium is used by many pharmaceutical companies, as well as agrochemical and cosmetics firms, to follow the fate of their experimental molecules in animals, plants and cells. GE uses a small range of reactions to introduce the label, often reducing a double bond or displacing a halogen group.

’Only 5 per cent of the tritium used in a labelling reaction gets incorporated into the product - and it has taken years of development to reach this level,’ explains Barry Kent, manufacturing manager for chemistry at the GE site. ’With the recycling plant, we can now get the other 95 per cent back, so we’ll be virtually self-sufficient.’

The plant has been designed to accept all the site’s tritium-contaminated waste, in just about any form, from liquid solutions to gases. The plant will run continuously, and can handle five litres of waste a day - enough to handle all the waste arising, and to process the site’s waste stockpiles within five years.

The company also produces some molecules labelled with radioactive carbon-14, and had planned to build a carbon-14 reprocessing plant to neighbour the tritium facility. But while the pilot-scale technology worked, it proved technically impossible to scale up, so those plans were shelved after consultation with regulators.

The first stage in the tritium recycling process is to break down the wide variety of molecules present in the waste into their basic components. The waste is dripped into a reactor heated to 1150?C, along with a large flow of oxygen. These conditions instantly vapourise the organic components of the waste, and fully oxidise them to carbon dioxide and water, with all the tritium incorporated into radioactive water.

This thermal oxidiser process was designed in collaboration with Stan Kolaczkowski, a chemical engineer at the University of Bath, UK. ’The difficulty was working out how to oxidise such a complex mixture of waste to get all the tritium out,’ Kolaczkowski told Chemistry World. Along with GE’s Ian Bonnet, in November 2007 Kolaczkowski received a commendation from the UK Institution of Chemical Engineers for the design.

Close to the wire

Once through the thermal oxidation process, the clean gases are released, while the weakly radioactive water is passed on to the next stages. The remainder of the process is designed to concentrate the tritium in water into a 99 per cent pure gas. 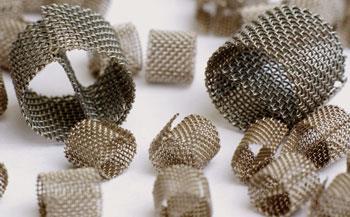 The water is first distilled, which exploits the slight preference of heavy, tritiated water molecules to remain a liquid rather than form a vapour. The distillation takes place in two connected columns with a combined length of 18 metres.

The columns are packed with Dixon rings - stainless steel wire mesh rolled up into tiny cylinders - to ensure efficient transfer of heavy water between the vapour and the liquid. By the time the vapour reaches the top of the column, it is pure water. The remaining liquid is 1000 times richer in tritium than the water initially fed in to the column.

The tritium-enriched water is then converted to a mixture of tritium and hydrogen gas, before being passed into a thermal diffusion column, which has a hot wire heated to over 1000?C running through the middle, and water-cooled external walls. As the molecules get close to the wire they dissociate and are flung outwards. The heavier tritium atoms have greater momentum and actually hit the cooled outer wall, dropping lower in the column, while the hydrogen atoms don’t reach the walls and rise up the column. Pure hydrogen leaves the top of the column, while the tritium collected from the bottom of the column, over 99 per cent pure, is absorbed onto a storage bed and can be directly re-used by the radio-labelling labs.

Construction of the nearly ?30 million tritium recycling plant at the Whitchurch site is now complete, and the plant is currently undergoing inactive commissioning with non-radioactive material. Later in 2008, once approved by regulators, the plant will go into active commissioning, with full operation expected to start in 2009.