Reading DNA base by base

A technique to electrically detect individual DNA bases cut from a single strand of DNA has been developed by researchers in the UK. Hagan Bayley and his team from the University of Oxford, working in conjunction with their spin-out company Oxford Nanopore, say they hope the technology will lead to a simple and affordable new DNA sequencing method.

The sensor can directly detect and differentiate DNA bases, meaning that the associated costs of sample preparation, data processing and data storage could be vastly reduced, say the team.

The technique works by breaking up DNA strands into their component nucleotide bases, and passing them through a single chemically and genetically engineered protein ’nanopore’ mounted on a lipid bilayer, explains James Clarke from Oxford Nanopore. Submerging the pore in a salt solution and applying a voltage across the whole system causes the bases to flow through the nanopore, giving a detectable current. As they pass through the pore, an ’adapter’ - a tubular cyclodextrin-based molecule - within the pore transiently binds each base as it passes. ’When a base binds in the pore, it obstructs the ion flow and we measure a drop in current,’ says Clarke. ’Each of the four DNA bases (A, C, G and T) shows a characteristic current drop, allowing them to be recognised.’ 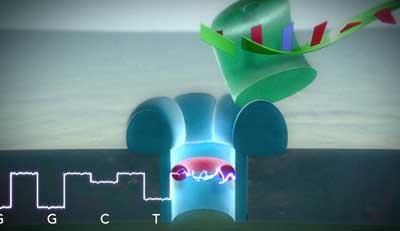 The pore-based sequencer would read DNA strands base by base

’At the moment the nucleotides are clipped from a DNA strand by an enzyme floating in the solution above the nanopore,’ says Oxford Nanopore’s Zoe McDougall. ’This means that the order in which they are detected does not necessarily correspond to the actual sequence. What we’re working on now is attaching this enzyme to the nanopore protein, so that as each base is cut from the DNA strand it is fed directly into the pore, giving an accurate sequence.’

Current ’next-generation’ sequencing techniques require DNA samples to be amplified (which can introduce replication errors), cut to the appropriate length, attached to a bead or surface and then chemically modified with an optical tag. The need for high resolution detection and signal processing equipment makes the process expensive.

In contrast, DNA samples for the nanopore technique need only to be clipped to the right length, and the simple electronic output from the sensor makes for easier processing and storage. One of the major players in sequencing technology, US-based Illumina, recently formed a strategic alliance with Oxford Nanopore, agreeing to market, distribute and service products based on this technology worldwide - potentially moving a step ahead of competitors Roche and Applied Biosystems.

’With fluorescence detecting, if you can’t tell which of the four colours the response is, there might be a four-way ambiguity - it could still be A, C, G or T,’ says McDougall. ’With the electronic trace from the nanopore, if we get an ambiguous signal that’s somewhere in between what we expect for, say G and T, then it’s only a two-way ambiguity because we know it’s definitely either G or T. This will make a big difference to the informatics processing when we come to sequencing.’

’We’ve reached a level of refinement in base recognition that could be used in a sequencer,’ Bayley told Chemistry World. ’The reduced costs and easy sample preparation makes this a big step towards the [US National Institutes of Health] target of a $1000 human genome.’