US scientists have found that a dye oxidation process using low levels of an iron catalyst could be used to degrade highly contaminated wastewater under ambient conditions.

128 tonnes of dyes are released daily into the global environment and the cost to the textile industry of removing the dyes is high. Wastewater remediation is challenging because of its diverse and often changing composition. Multiple technologies are employed to achieve the regulatory standard for treated water discharge. In some cases, remediation of highly concentrated waste streams becomes a greater challenge because biological treatment is too slow or ineffective or chemical treatment is inefficient. 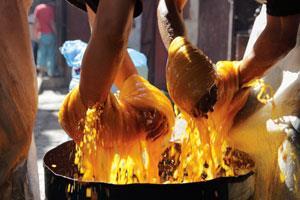 Colin Horwitz along with Terrence Collins and colleagues at Carnegie Mellon University in Pittsburgh have found that the top selling azo-dye tartrazine, a food colourant, can be degraded under ambient conditions using an activated peroxide treatment. The team used low levels of a Fe-TAML (iron-tetraamidomacrocyclic ligand) catalyst and found that 1kg of the catalyst could treat 13 tonnes of the concentrated dye solution to achieve >97 per cent decolourisation.

’We are all striving for clean water but we constantly hear about the myriad chemicals that are getting into the environment from industrial processes, farm run-off, household products and many other sources,’ explains Horwitz. ’The TAML catalyst-H2O2 system is a potent technology for cleaning up water polluted with organic chemicals. Yet the actual degradation process is much more complicated. Even for the dye used in this study, there are many intermediate products and identifying these will be challenging,’ he adds.

Fabian Fischer, an expert in oxidation catalysis at the University of Applied Sciences Western Switzerland comments: ’It is interesting that azo-dyes are still widely used [some azo-dyes have been found to be carcinogenic] and that the activation of hydrogen peroxide is possible by such a simple metal organic catalyst. Other oxidation catalysts may compete in the future once they become less expensive and toxic. Also, further studies need to show that the resulting products are biodegradable.’

Horwitz’s team found evidence of intermediate degradation products acting as mediators in the reaction and future work will involve investigating the kinetics and mechanisms of these mediated reactions with a view to improving the catalytic reactions.