Could ripe bananas be the new nightclub glow stick? The yellow fruits glow bright blue under ultraviolet light, researchers in Austria were surprised to discover - with the intensity of the blue glow peaking at the point the fruit is perfect to eat. 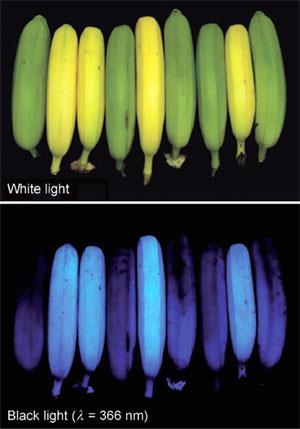 Bernhard Kr?utler and colleagues at the University of Innsbruck made their colourful discovery while looking for yellow-tinged chemicals in banana skins. The team dipped fresh bananas in liquid nitrogen to extract the compounds and then analysed them by high performance liquid chromatography (HPLC). ’We were very surprised to find some that were blue luminescent,’ Kr?utler told Chemistry World.

This fluorescence, which has not been observed in any other plants or fruits, appears to come from the breakdown products of chlorophyll - which in bananas take longer than usual to convert to colourless compounds. The team then looked at both freshly-grown and artificially-ripened banana skins under ultraviolet light and observed a bright blue glow. ’What baffled us most was that no one has reported this before,’ Kr?utler added.

Light-absorbing chlorophyll is behind the fruits’ colourful chemistry. Chlorophyll is critical for bananas to grow and is responsible for the green colour of unripe bananas. But once ready to eat, the chlorophyll quickly breaks down - leaving the recognisable yellow colour of carotenoids in the skin to become dominant. 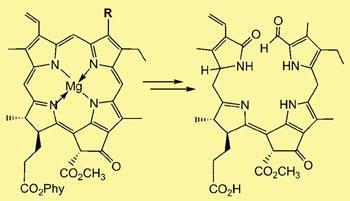 Chlorophyll (left) breaks down into the blue fluorescent Mc-FCC-56

The team identified the compounds responsible for the blue fluorescence, discovering chlorophyll breakdown products unique to bananas. The main compound - named fluorescent catabolite of chlorophyll 56 (FCC-56) - has unusual propionate ester functionality, which the team believe provides extra stability and allows the compound to last for a few days.

As for the roles this chemical may play in the wild, there could be many possibilities. Kr?utler speculates that in direct sunlight, the blue fluorescence probably contributes to the characteristic bright yellow colour of bananas, and may allow them to be spotted more easily by creatures that feed on them. Philip Rea at the Universityof Pennsylvania, US, is also surprised about the discovery, but is less sure about the possible roles the compounds play in nature. ’Many banana eating frugivores, for instance fruit bats, are nocturnal echo-locators and hunt in the dark.’ Others rely on smell, Rea notes, or would need a very narrow visual range to spot the blue emission.

Another suggestion is that these blue fluorescent compounds may play a biological role, perhaps catalysing specific reactions or maybe just protecting the banana from UV rays - rather like a sunscreen - allowing the fruit to stay fresh for longer. Kr?utler’s team are continuing to investigate and are now hunting for other fruits with similar behaviour.