Chemists have found a chemical reaction that ignores its reaction coordinate and seemingly bypasses the conventional mechanics of transition state theory (TST) to display two distinct ’roaming’ mechanisms. The discovery could have implications for understanding the atmospheric photochemistry of nitrogen(VI) oxide (NO3) as it dissociates into nitrogen(II) oxide (NO2) and molecular oxygen.

Physical chemists have spent decades plotting reaction coordinates, the path that takes reactants from A to B to make products. A reaction coordinate explains the process of bond breaking and making and often highlights the existence of a transition state with a ’tight’ saddle point in potential energy surface through which intermediates must pass. However, evidence began to emerge showing that there are other routes reactants might take involving roaming atoms. It was demonstrated that photodissociation of some aldehydes, methanal and ethanal, also ignored conventional TST. In these aldehydes, instead of following the anticipated paths, a hydrogen atom simply wends its way around a molecular fragment and grabs another hydrogen to form hydrogen gas.

A team from the US and Japan has demonstrated that two such roaming processes take place during NO3 photodissociation. The researchers, through their experiments and theoretical calculations, have shown that roaming oxygen atoms can either roam back to the reactants and then release O2 in high vibrational states or proceed further to form lower vibrational states. ’I find it particularly fascinating, and ironic, that the unappreciated optically dark state of NO3 provides the only route to products in the light driven photochemistry of the molecule,’ says Simon North from Texas A&M University, who led the research. 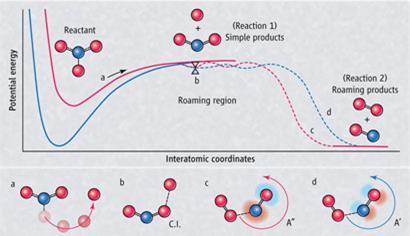 When roaming radical reactions were first discovered it was assumed that chemists would have to rethink TST. ’This has changed since the discovery of the roaming saddle points and the subsequent demonstration that TST can be adapted to treat these reactions,’ explains Larry Harding of Argonne National Laboratory in Chicago, US. ’This group has reported yet another new facet to these roaming reactions. In the dissociation of NO3 they find two distinct roaming mechanisms occurring on two different electronic surfaces. When oxygen atoms roam, they can roam on either of these two reactive potential surfaces,’ Harding says.

’Although roaming has been observed previously in other systems, it is often a minor pathway,’ North adds. ’In NO3 it is the only pathway and the reason why [the] photolysis mechanism has remained elusive for so long.’

Harding suggests that many researchers in this field now agree that roaming radical reactions are simply following a different kind of reaction path associated with floppy saddle points. ’The floppiness of the roaming transition state region does introduce some complications in the application of TST but does not call for a new paradigm in reaction rate theory as some originally thought,’ he adds. ’Traditional TST is not being ignored or bypassed [by NO3], it is simply not applicable,’ he explains. ’However, TST based on the roaming saddle points should work just fine, although this has not yet been done for this system.’