A UK team has stumbled upon an efficient way to separately produce each member of an unusual mirror image pair of chemical systems that has eluded scientists for over four decades.1 Stephen Goldup and Robert Bordoli at Queen Mary University of London have made planar mechanically chiral rotaxanes, which trap macrocyclic rings along the shaft of dumbbell molecules. Goldup now wants to apply these newly accessible asymmetric assemblies in catalysis, sensing and materials. ‘We think it’s time that the advantages of mechanical chirality are properly investigated and begin to play a role,’ he tells Chemistry World. 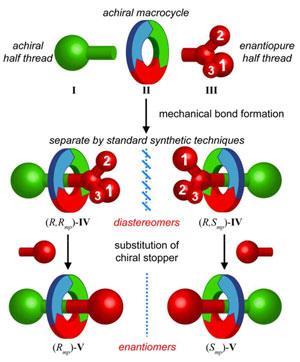 Chirality is chemically most familiar in covalently bonded compounds, particularly carbon atoms with four different substituents that can be arranged into ‘left- and right-handed’ enantiomeric forms. Mechanical chirality refers to interlocked molecules without that covalent arrangement but that still form mirror image enantiomer pairs. Producing and isolating such systems without using chiral chromatography has been problematic, at least since the University of Freiburg’s Gottfried Schill published his 1971 book Catenanes, Rotaxanes and Knots, Goldup notes. ‘I’ve always thought it was an interesting synthetic challenge, but we got into the area by accident,’ he admits.

In 2011, Goldup’s team made a small rotaxane with a chiral glucose based stopper at one end of its dumbbell.2 But they saw an unexpected chiral splitting pattern in the NMR spectrum for the system’s ring. That suggested an interaction large enough to affect physical properties, and that might help isolate different chiral forms. ‘This gave us hope that diastereomers based on these very crowded molecules would have very different properties and may even be separable by normal column chromatography,’ Goldup says. ‘But we didn’t know for sure until the two came off the column in different fractions.’

Bordoli then established the diastereomers’ chirality by x-ray crystallography, before substituting the chiral sugar with a planar aromatic group to create a mechanical enantiomer pair. ‘People hadn’t managed this before as rotaxane mechanical diastereomers have been separated only once to our knowledge, and previous systems were not rigid enough to lead to crystals,’ Goldup said.

David Leigh, who also studies rotaxanes at the University of Manchester, UK, calls the approach ‘a great idea, well executed to give an important result’. ‘Mechanically chiral rotaxanes are almost completely unexplored as sources of chirality for inducing asymmetry  in chemical reactions, so the Goldup group’s facile route to such architectures is a major breakthrough in this regard,’ he adds.