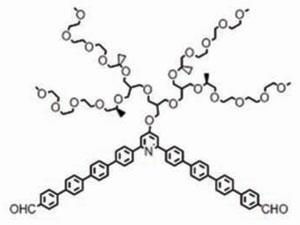 Researchers have developed dynamic nanotubes that open and shut depending on temperature. Until now, synthetic nanotubes were highly rigid and would not reversibly respond to changes in their environment. This has limited their use in molecular machines, but this new ability could change that.

Self-assembling nanotubes have been observed in nature for decades. A classic example is the tobacco mosaic virus, which has a protein that binds to other copies of itself, around an RNA helix, to form a hollow tube. Inspired by this, scientists have tried to recreate these self-assembling tubes and add new, useful characteristics.

The latest effort to create designer self-assembling tubes uses a molecule with a long, boomerang-shaped chain of aromatic groups. This chain is bent around a central pyridine, which is also attached to an extended branched chain of ethers. The aromatic groups are hydrophobic, so multiple copies of the molecule come together to avoid water and form p–p interactions. Six of these molecules can form a hexagon, with each of the aromatic ‘arms’ overlapping. Meanwhile, the oligoether chain readily interacts with water, and forms the outer surface of the hexagon.

At higher concentrations, these hexagons stack on top of each other to form a hollow tube 500 layers thick, on average. When the temperature rises from room temperature to 60°C, the interactions between water molecules and the pyridine and ether groups are broken. This then allows the aromatic groups to overlap even further, which shrinks the central cavity in the tubes by nearly 50%.

The researchers were able to demonstrate this phenomenon by filling the tubes with buckyballs – C60 molecules. They found that for every five layers of hexagons, at room temperature, they were able to squeeze in 24 buckyballs. When the tubes were heated they found that half of the C60 molecules were squeezed out. By returning the samples to room temperature, the tubes expanded and the C60  molecules had more space to move.

Myongsoo Lee from Seoul University, South Korea, who led the research, suggests that the contracted nanotubes could be used to hold other nanoparticles in line. Nanoparticles, such as buckyballs, hold great potential as molecular transporters or electrical conductors. However, these roles rely on the nanoparticles being closely packed in a line, just like you would find in the contracted nanotubes. This tightly packed arrangement in the nanotubes could then be controlled using temperature as a switch.

Jon Steed from Durham University, UK, who was not involved in the research, says:  ‘It takes us another step forward along the way to making sophisticated functional nanosystems, even if you don’t necessarily know what you’re going to apply that to today – we’re working on a 50 year timescale …  It ticks a lot of boxes in my mind in terms of something that is adapting, changing, functional [and] dynamic in ways that are difficult to engineer.’