A sensor that identifies drugs compounds and monitors changes in their concentrations as they enter the body through an intravenous (IV) drip could prevent medication mistakes.

Over 60% of life-threatening errors during hospitalisation are attributed to the administration of incorrect dosages or combinations of IV drugs. Methods that detect and track drug administration in real time would add an extra layer of protection to IV drug delivery.

Recent research, led by Brian Cunningham at the University of Illinois in the US, has produced biomedical tubing that uses surface enhanced Raman spectroscopy (SERS) to monitor the contents and concentrations of drugs within a patient’s IV line.

This is not the first time that SERS has been used to monitor IV drug delivery but this time it has been integrated with a plasmonic nanodome array (PNA) surface. The PNA surface enhances the Raman signals by a factor of around 5×108, to a level much higher than other commercially available SERS surfaces. Drugs can therefore be monitored at a range well below typical dosages. 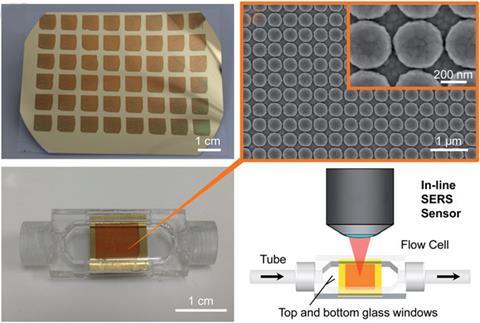 The tubing could detect 10 pharmaceutical compounds with reproducible signals for a period of up to five days. For four of the drugs, the signal magnitude was dependent upon the drug concentration and combinations of compounds could also be detected, giving a much more detailed picture of a patient’s medication.

Duncan Graham, a SERS expert at the University of Strathclyde in the UK, is impressed with ‘the excellent sensitivity and reproducibility’ shown by the device and says ‘being able to monitor drug levels in a simple and rapid manner will be advantageous for patient treatment.’ He adds that as common plastic tubing is used it is relatively compact and inexpensive to manufacture so could practically be adopted in a clinical setting as a single-use disposable device.

However, as Cunningham explains, ‘a current limitation is that combinations of drugs result in complex Raman spectra with some overlapping peaks, particularly for drugs that have similar molecular structures.’ Therefore, ‘future work will involve the characterisation of bigger sets of multi-drug combinations as well as miniaturising the detection instrument’.