Shining a light on neural activity

US researchers have developed a new way to activate brain neurons that could lead to less invasive methods of restoring function in damaged nerves and brain tissue. The researchers from Cape Western University, Cleveland, used tiny micropipettes coated with light-activated semiconducting nanoparticles to wirelessly stimulate neurons in samples of rat brain.

Normally, artificial nerve stimulation requires sharp metal electrodes that introduce an electrical current to a specific area. However, the use of the method is limited as it cannot mimic the highly complex patterns of natural nerve stimuli and can cause irreparable tissue damage due to electrochemical side reactions.

’There are many different things you’d want to stimulate neurons for - injury, severed or damaged nerve to restore function,’ says Ben Strowbridge, an associate professor in the neurosciences department at the Case Western Reserve School of Medicine and one of the authors of the Angewandte Chemie article. ’Right now you have to put a wire in there, and then connect that to some control system. It is both very invasive and a difficult thing to do.’

In collaboration with Clemens Burda from Case Western University’s Center for Chemical Dynamics and Nanomaterials Research, Strowbridge has developed tiny photoelectrodes that can activate neurons simply by being exposed to laser light.

The photoelectrodes were made by coating the interior of very fine microtip pipettes with the semiconductor lead selenide. On exposure to near infrared laser light an electrical field builds up around the microtip and this electric field then stimulates the neurons. 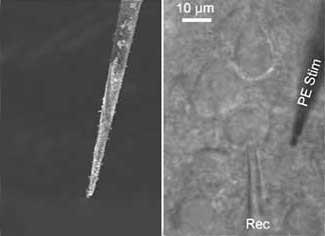 Because lead selenide is toxic, the team created a series of photoelectrodes that were only coated on the inside surface of the glass microtips - preventing cells from interacting with the toxic semiconductor. By isolating the photoelectrode within a glass layer the researchers discovered that neurons can be activated by local electric field effects and that direct chemical electron transfer is not needed.

’Designing nanomaterials that relate external physical signals to biological process performance in neuronal cells is particularly novel,’ says Sasha Kabanov, director of the Center for Drug Delivery and Nanomedicine at the University of Nebraska Medical Center, US. ’As a scientist interested in materials medicine, to do that in an artificial situation is fascinating and a real step forward.’

The scientists say their research means that, theoretically, it should be possible to embed the photoelectrodes directly into the tissue, allowing for a more controlled reaction that closely replicates natural nerve activity.

To realise this, however, the team first need to see if longer neuronal pathways can be stimulated in functioning brains, rather than just in the rat brain samples they have been working with so far. ’The long-term goal of this work is to develop a light-activated brain-machine interface that restores function following nerve or brain impairments,’ concludes Strowbridge.