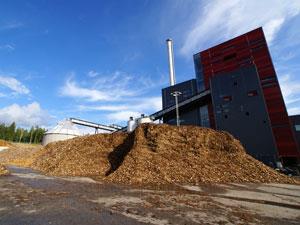 Burning biomass for heat and power could produce as much as 2000 TWh by 2020, which would produce 4–15.6 million tonnes of waste ash, per year, in Europe alone. To address the problem of what to do with all this waste, scientists in the UK have developed a method to convert this ash into mesoporous silica.

Although some of the waste ash produced from the combustion of biomass is currently used in construction, most of it ends up in landfill. Therefore, extracting alkali silicates, which can be used in cement, detergents, catalysts and catalyst supports, is one way of reusing the potentially huge quantities of ash due to be produced in the future.

The team, led by Duncan Maquarrie at the University of York, developed an efficient route for extracting the silicates by forming alkali silicate solutions. The silicate solutions were converted into the porous silica, MCM-41, a useful catalyst and molecular sieve. ‘We have to become more sustainable and re-evaluate what we currently call waste,’ says Maquarrie. ‘While most of our work (and most of everyone else’s) has been focused on the organic side of things, it is important to remember that there are always inorganic waste streams and that they can become valuable resources too.’

‘When talking about biomass utilisation, most people would think of the organic part of biomass. However, there are a large portion of inorganics in biomass which have drawn much less attention,’ says Xiaoming Wang, an expert in environmental catalysis from BASF, US. ‘This works sheds light on the future use of inorganic waste from biomass combustion.’

The team hope to expand this work to assess whether the performance of MCM-41 is affected by the silicate source and if ash from plants that have taken up metals during their lifetime can be used to make metal loaded catalysts.