Silk delivers drugs without the pain

US researchers have developed a new microneedle drug delivery system using silk. The team says that its multifunctional properties could offer a safe and pain-free way to administer drugs and vaccines, as well as store drugs without the need for refrigeration.

Microneedles have gained a lot of interest in recent years as a safe, pain-free alternative to hypodermic needles. As a patch, they can be placed onto the skin like a plaster allowing for self-administration, and as they can’t reach pain receptors under the skin they don’t hurt.

But while some microneedle systems have shown promise, the materials they have been made from - namely sugars, cellulose-based materials and synthetic polymers - have had limitations, such as the inability to precisely control drug release and to prevent the onset of local infections.

Now, David Kaplan and Fiorenzo Omenetto and colleagues at Tufts University have developed high-aspect-ratio microneedles with silk fibroin - a protein found in silk - that presents a multifunctional solution to overcome previous limitations. The team demonstrated that their silk microneedle is biocompatible and degradable, can incorporate, store and controllably release sensitive drugs, and can even include antibiotics to prevent skin infections. 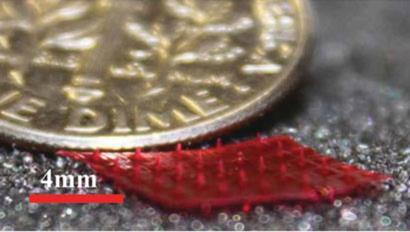 ’We are certainly enthusiastic about the potential for this technology in many areas of medicine,’ says Kaplan. ’The drugs can be entrapped in the silk and become stabilised - even at higher temperatures - thus allowing processing from water into delivery systems that can be used like a band aid, carried in your pocket and shipped around the world without refrigeration.’

The silk microneedles were made by first creating an elastomer-based negative mould of a microneedle array using polydimethylsiloxane (PDMS). A silk fibroin solution obtained from silk worm cocoons was then drug loaded and cast over the PDMS template and left to dry. By adjusting the hydration state of the silk, and thus the secondary protein structure, the team could modify degradation and diffusion properties of the silk microneedles.

To test out the release kinetics, the team applied the microneedles to in vitro hydrogel skin models. They also created microneedles loaded with an antibiotic and observed a 10-fold reduction in bacterial density when applied to a cell culture, which could help avoid skin infections associated with other microneedle systems.

’There is a need for microneedles that are biodegradable and can be formulated with drugs under mild conditions and the data in this paper looks very encouraging,’ says Niren Murthy, a biomedical engineer at the Georgia Institute of Technology, US. ’A key challenge will be to determine if there will be an immune response to the silk proteins,’ he adds.