Simple one stop shop for difluoromethylation

Inserting fluorine atoms directly and simply into various organic substrates including heteroaromatic rings is now possible thanks to a user-friendly and scaleable difluoromethylation process developed by US researchers. The find opens the way for adding difluoromethyl (CF2H) groups to drugs and agrochemicals in order to enhance their properties.

Many new life science products, including drugs and agrichemicals, contain fluorine atoms or trifluoromethyl (CF3) groups because the fluorine atom can increase the metabolic stability and efficiency of bioactive compounds. For example, the CF3 group in prozac allows the drug to be transported across the blood-brain barrier. However, until now, CF2H groups could only be added to bioactive compounds using complicated two-step or multi-step difluoromethylation processes.

’Medicinal chemists have told us for years exactly what they want and how they want to do it. We have listened,’ says Phil Baran, who led the research at the Scripps Research Institute in La Jolla, California. ’This reaction installs a functional group that they sorely desire in a way that is amenable to parallel synthesis in an open flask and in water with simple, non-toxic reagents and a procedure that rivals the simplicity of preparing your morning coffee - add one solid reagent, one liquid reagent and stir.’ 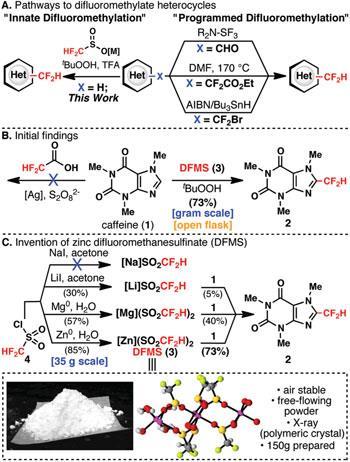 The team invented the solid reagent using difluoromethanesulfonyl chloride as a starting point and added various metal counterions until they identified zinc dialkylsulfinate salt (DFMS) (Zn(SO2CF2H)2) - an easily prepared, air-stable white powder - as the optimum precursor for the CF2H radical.

They then tested the reagent on a variety of organic substrates and successfully demonstrated the effective direct transfer of a CF2H unit to heteroarenes,

-unsaturated enones and aromatic thiols. ’There is no alternative for a chemist who wishes to directly install a difluoromethyl group in these kinds of spots on a molecule,’ says Baran

’I think it’s a nice way of making aromatics with CF2H groups attached and I know that a lot of pharmaceutical companies are looking at systems like that,’ says Graham Sandford, who researches organofluorine chemistry at the University of Durham, UK. ’You don’t get fluorinated molecules from nature, so you have to put the fluorine atom in there and that’s a difficult thing - that’s why new methodology that is simple and scaleable like Baran’s process are always very valuable,’ he adds.

’I think a reaction can always be made more practical and higher yielding, but in the meantime Sigma-Aldrich has commercialised this reagent and it is already being employed at a few pharma companies,’ Baran adds.