The researchers say the approach could be used to pin down the structures of natural products when traditional methods such as NMR spectroscopy fail.

Leo Gross and his team from IBM Research in Zurich, Switzerland, worked with Marcel Jaspars and Rainer Ebel at the University of Aberdeen, UK, and used a non-contact atomic force microscope (NC-AFM) to unambiguously solve the structure of cephalandole A, a known metabolite extracted from the Dermacoccus abyssi bacterium.1

The NC-AFM measures atomic force using an atomically sharp tip mounted on an oscillating spring. When the tip is close to a molecule on a surface it ’detunes’ and the resonance frequency of the tip alters slightly - a change that can be recorded. Each atom in the molecule causes a different detuning effect which is converted into dark or light areas to make up an image. To stop the point of the AFM sticking to the molecules it is trained on, a single carbon monoxide molecule is attached to the tip, which also dramatically improves the image’s resolution. 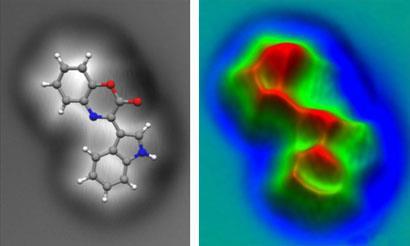 Ebel explains that using mass spectrometry the team could identify the molecular formula of cephalandole A. ’However, when we tried to assemble the different substructures that were evident from NMR studies, we realised there were actually four working structures and that this was a situation where NMR might not give an unambiguous solution,’ he says. ’Having the [AFM] images available was absolutely fantastic, because immediately we could rule out two of the four structures and then with theoretical calculations it was clear that only one was correct.’

Last year Gross’s team demonstrated the technique by imaging all the atoms in pentacene - a planar, highly symmetric molecule containing only carbon and hydrogen atoms.2 Gross explains that cephalandole A contains carbon, hydrogen, oxygen and nitrogen and has no symmetry planes, which makes structure determination more difficult ’This is really the first time that we started off with a molecule that we didn’t know and really used AFM to identify its structure,’ he says. ’We have now shown that this method is applicable to a large number of cases, not only special cases such as this,’ he adds.

Franz Giessibl, an expert in AFM at the University of Regensburg in Germany thinks the research is very exciting. ’While there have been candidates for the structure of this molecule it was really only AFM that could point out which of the candidates is actually applicable,’ he explains.

Giessibl is confident that after seeing how successful AFM is at solving structures, the technique will be used more in chemistry and other fields of research. He also suggests that in the future, researchers who are not experts in AFM may be able to interpret the data. ’I don’t think it can solve every problem that cannot be solved by NMR, but it will become complimentary to other analytical techniques,’ he adds.

Gross hopes that the team can develop the technique further to have better chemical sensitivity. ’In the future, this technique could contribute to faster identification of molecules, which has implications for pharmaceutical applications,’ he says.