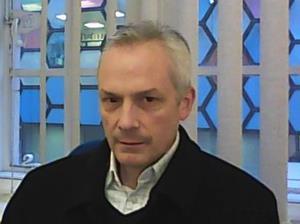 Stan Golunski is a professor of catalysis and deputy director of the Cardiff Catalysis Institute. His research is in areas of heterogeneous catalysis that can be applied both synthetically and for environmental control.

How would you describe your overall research aims?

I’m primarily interested in trying to use existing fuel and energy resources as efficiently as possible. Usually, when chemists talk about sustainability, they have new renewable fuels and feedstocks in mind, but what I’m trying to do is extend the useful lifetime of the resources we already have.

What does your position as deputy director of the Cardiff Catalysis Institute [CCI] involve?

We’re a large organisation, with close to 100 researchers in total. Together with the director and another deputy director, I am part of the CCI management team. Additionally, as the CCI is an integral part of the Cardiff University School of Chemistry, I have teaching, research, administration and outreach duties within the School.

Do you get involved with all of the CCI projects?

Despite the size of the CCI, I can honestly say that we work together as a close-knit unit. I’m aware, therefore, of all of the ongoing projects, but have a much greater part to play in those in which I am the principal investigator (PI). Wherever possible, I prefer to share the supervision of individual research students with my colleagues. In this way, the students have the benefit of the experience of more than one supervisor, and they always have someone to turn to.

Can you tell me a about a project you’re involved with as a PI?

One particular challenge that I am grappling with is how to recover the heat released by vehicles.1 Even the most efficient internal combustion [IC] engines waste about 70% of the useful energy contained within the fuel that they consume. I’m trying to do useful chemistry within the exhaust system to recover some of that waste heat. This is quite a complicated concept to describe: If you can imagine the exhaust system as a long straight pipe coming out of the engine, then add a branch from the exhaust pipe back to the engine. What you now have is a recirculation loop that allows some of the exhaust gas to be fed back to the engine. 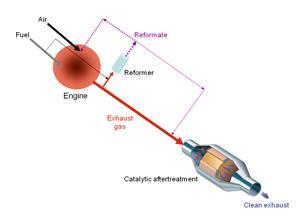 Exhaust system with reformer fitted in an exhaust gas recirculation loop. The output of the reformer can be fed into the engine

By fitting a catalytic reactor into the recirculation loop, with a fuel injector just upstream of it, you can consume the heat from the portion of exhaust gas being recirculated. This process of heat recovery only works if the injected fuel undergoes endothermic reactions with the H2O and CO2 in the exhaust. The products of these reactions, CO and H2, which are fed back to the engine, have a higher combustion value than the fuel injected into the catalytic reactor. Surprisingly, it does not turn a car into a perpetual motion machine, as one referee thought we were claiming!

How did you get involved in this type of research in the first place?

I was lucky enough to choose the right optional courses in my final year as a chemistry undergraduate at the University of Kent at Canterbury. Ever since then, I’ve been interested in heterogeneous catalysis, which led me to do a PhD and postdoctoral research in the field. I was really fortunate to have two very inspiring supervisors – Tom Nevell at Portsmouth and Robbie Burch at Reading – who made me realise that I wanted to pursue a career in catalysis.

When I went into industry, I initially worked on aftertreatment systems in which catalytic converters and catalysed filters are used to clean-up exhaust gases coming out of IC engines. Then, between 1995 and 2005, I concentrated on the alternative technologies being developed at that time to generate, purify and store hydrogen on-board a vehicle, so that it could be used in a fuel cell. At some point, these ideas merged into one, when I began to work with combustion engineers at the University of Birmingham to generate hydrogen on-board a conventional IC vehicle. The aim was to use the hydrogen to promote some forms of catalytic aftertreatment, particularly the reduction of NOx. When my colleagues at Birmingham started to do some system modelling to see what the fuel penalty might be, we suddenly realised that there doesn’t have to be a penalty at all. In fact, the models predicted that, providing you can design the right catalyst to do the right chemistry, you should be able to boost the fuel economy. That’s when it started to get really exciting!

Can you tell me about the metallic nanobeads being designed at the CCI?

Your term ‘nanobeads’ is a very good way of describing the highly dispersed metal particles that we support on porous materials to produce heterogeneous catalysts for carrying out selective oxidation reactions. However, high-resolution electron microscopy by our collaborators at Lehigh University in the US shows that the nanobeads are not perfectly spherical, or hemi-spherical for that matter, but are much more like nanoscopic facetted gemstones. 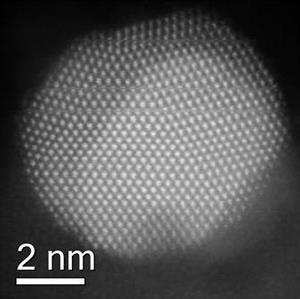 Qian He and Christopher Kiely of Lehigh University, US

One really interesting effect is that as you change the size of the nanobeads, the catalytic properties can change as well. So, gold nanobeads with a diameter between 2–5nm seem to have pretty distinctive characteristics. There are only a few hundred metal atoms within each nanobead of that size, and so it is a very effective way of using gold because the ratio of exposed metal atoms to those trapped in the bulk is very high.

Have you got examples of those catalytic properties?

At the CCI, we have gone one step beyond making uniform nanobeads, by adding a second metal to the gold. For example by alloying gold and palladium, we have created very selective catalysts for the direct synthesis of hydrogen peroxide from H2 and O2. Palladium on its own is quite active for this reaction, but the rate of hydrogen peroxide formation can be doubled by combining it with gold. Perhaps the most important function of the gold is in switching off the consecutive hydrogenation of hydrogen peroxide (to water) once it has been formed.

Why do you want to make hydrogen peroxide?

Hydrogen peroxide is a very effective disinfectant and bleaching agent, and is more environmentally friendly in these roles than chlorine or chlorinated compounds. It is currently manufactured in bulk, using an indirect chemical route, to produce a high concentration solution, which is how it is transported before being diluted for use. By developing a small-scale process for the direct synthesis, which operates outside the explosive limits of H2, you could safely produce dilute hydrogen peroxide at the point of use.

Part of your research uses supercritical anti-solvent precipitation. What does this allow you to do?

This is part of our catalyst synthesis repertoire at the CCI. We consider ourselves to be pioneers in using this method for making catalysts, but we hope others will follow where we are treading at the moment.

From lab to industrial scale, many heterogeneous catalysts are made using classic inorganic preparation methods, such as precipitation, impregnation and ion-exchange. These are tried and tested techniques, but are prone to variability, can leave contaminants in the catalyst and can generate substantial waste streams when used on a large scale. Therefore, one of the incentives for looking at alternative preparation methods is to find cleaner catalyst manufacturing routes. During supercritical anti-solvent precipitation in our small pilot-plants, we use carbon dioxide that’s been compressed to between 100 and 150 bar and is at a temperature of 40–60 °C. Under these conditions, the CO2 behaves both like a liquid and a gas – its density is comparable to that of a liquid, and its rapid diffusion properties are comparable to that of a gas. When used as a solvent, it allows very effective mixing in a very short space of time. Typically, we will start with a nitrate-free metal salt, which we dissolve in a solvent which itself is soluble in supercritical carbon dioxide. When this solution is sprayed into the supercritical fluid, the metal salt immediately starts to precipitate in a very controlled way. The precipitated particles are very regular in size and highly amorphous. We’ve also discovered that when you decompose the precipitate, the metal oxides that are formed are highly defective, which can translate into a pronounced effect on the catalytic properties of the final catalyst.

But getting back to the green qualities of this route, it is worth stressing that the carbon dioxide can be continuously recycled, and that you can recover all of the original solvent used to prepare the metal salt solution.

You’ve just started working with the KCMC [Knowledge Centre for Materials Chemistry]. Can you tell me more about this collaboration?

At the CCI we pride ourselves on our relations with industry. In the area of environmental catalysis, we collaborate closely with car companies, catalyst producers and engine manufacturers. In other areas of research, my colleagues collaborate with chemical companies of all shapes and sizes, from SMEs [small and medium enterprises] to multinationals. We’re now trying to promote new applications for catalysis, and find out what industry wants and needs. For this we need to communicate with people working in a range of different sectors. This is where the KCMC will have a critical role to play – they will act as an interface between us and a new range of collaborators within industry. By sitting between academia and industry they’re able to match up research expertise and industry need. We are also greatly looking forward to working more closely with the other universities within the KCMC network – Bolton, Liverpool and Manchester. They each have particular expertise that will complement our own.

Are you working on a particular project together?

In joining the KCMC the CCI has become a key part of a network that up until now has been based in the north-west of England. We’re extending not only the geographical scope but the breadth of research the KCMC represents. As part of this process, we have to explain what we’re capable of doing and the ideas that we have, perhaps to people that haven’t previously thought about catalysis within their business areas. For companies dealing with messy or slow reactions catalysis can transform the efficiency or create new business opportunities, for example by turning waste streams into useful products in a financially viable way.

Where do you get the inspiration of your research?

Some researchers are at their most creative if they’re not constrained by specific targets or an intended application. By giving free reign to their thoughts and experiments, they will often have a eureka-moment when they suddenly see the potential of their work. I don’t fall into this category. I find it easier to be productive when I can see the problem that I am trying to solve.