Hydrogels could be used to deliver drugs through wound dressings

An adhesive material made from a hydrogel filled with nanoparticles could lead to wound dressings that won’t fall off when you sweat. It could even be used to deliver drugs through skin, claim French scientists.

Traditional wound dressings lose their ability to stick to skin in the presence of water - a major component of sweat - shortening their lifespan. Now, scientists led by Bruno Grassl from the University of Pau and Pays de l’Adour have developed adhesive materials based on hydrogels to overcome this problem. Hydrogels contain a large quantity of water already, which allows them to tolerate the additional water from sweat; however, their mechanical properties, such as elasticity, are often poor.

To improve the mechanical properties and induce pressure sensitive adhesiveness - where the adhesive forms a bond with a surface to enable it to stick when pressure is applied - the team filled hydrogels with nanoparticles made from polystyrene. ’There is a link between the gels’ rheological [flow] properties and their adhesive properties,’ explains Christophe Derail who worked on the project. ’Nanoparticles can keep the rheological behaviour constant even if the gel absorbs a large amount of fluid.’ 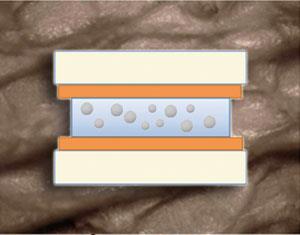 The team found that a hydrogel component made from polyacrylamide and poly(acrylamide-hydroxyethyl methacrylate) had the best mechanical strength and adhesion. When they tested the resulting material on artificial skin made from fat components added to protein, they saw that the material was easily removed from the skin, which is important for skin contact applications.

The hydrogel’s capacity to retain water could have other implications as the team claim that their high water content could make them suitable to contain fluid excipients - carriers that enhance drug transport - allowing them to act as dressings or skin patches for drug delivery.

Jian Ping Gong, an expert on the properties and applications of gels at Hokkaido University, Japan, says it’s an interesting piece of research. ’The application of a hydrogel as a pressure-sensitive adhesive has many advantages over conventional adhesives owing to the hydrogel’s permeable nature.’ She adds that the copolymer from acrylamide and hydroxyethyl methacrylate is inert to cells, making it suitable for skin contact materials.