Storm on the horizon for ozone levels 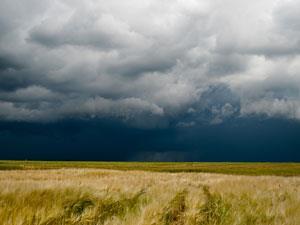 Summer storms can inject water vapour high into the atmosphere and trigger processes that degrade the ozone layer, say US chemists. The work reinforces the view that climate change and ozone depletion cannot be considered separate problems and has implications for proposed ‘climate engineering’ measures aimed at regulating climate change.

Depletion of the ozone layer is generally associated with polar regions and halogen radical species stemming from chlorofluorocarbon (CFC) pollution. But, says James Anderson from Harvard University, much of the atmospheric chlorine that originated from the breakdown of CFCs is incorporated into inorganic chlorine compounds, like HCl and ClONO2.

Under normal conditions in the stratosphere, several kilometres above the Earth’s surface, these compounds are maintained in a steady state. They do not generate significant quantities of the free radical chlorine species that break down ozone, unless the temperature drops below a certain threshold value.

Anderson points out that the reactions that convert inorganic chlorine into the free radical forms occur on the surface of sulfate aerosol particles. This means the threshold temperature is dictated by a combination of the sulfate aerosol surface area and the amount of water vapour. Increasing either of these raises the threshold temperature, making it more likely that the temperature will be suitable to generate significant amounts of free radical chlorine species, leading to localalise ozone depletion.

As part of an investigation into how summer storms in the US affect the formation of high altitude cirrus clouds, Anderson’s team flew an instrument-packed aeroplane through areas hit by storms. ‘We found, to our dismay, that water was being injected deep into the stratosphere,’ he says. ‘That was completely unexpected – the canonical view was that these convective storms go up to the tropopause [the interface between the troposphere and the stratosphere] and spread out.’

The team calculated how these increased water levels would affect local ozone levels and found that the ozone depletion continues for several days after the initial injection of water into the stratosphere. This was driven by the time it takes to recapture the chlorine radicals as inorganic forms and the fact that the water also cools the stratosphere, keeping the temperature below the threshold even longer.

‘This work shows clearly that you can have large local losses of ozone,’ says Neil Harris, an atmospheric chemist from the University of Cambridge, UK. But he adds that to see the real significance of the effect, the calculation needs to be combined with data on the number of such storms that are occurring – both in the US and elsewhere. Harris notes that the Asian monsoon could have similar effects. ‘It’s almost like a big thunderstorm, except it lasts for a long time. But it’s similar in the sense that it injects air into the lower stratosphere, which also injects quite a lot of water vapour, so the same chemical mechanism could apply.’

Anderson agrees that there are lots of other systems that could potentially stimulate the same kind of water injection and ozone depletion, but adds that for this study the team has stuck to the US as that is what they have direct evidence for.

However, one of the most far-reaching implications of the research is that it reconnects the issue of climate change with that of ozone depletion and decreased protection from ultraviolet radiation. ‘We’ve tried for 25 years to keep the climate issue clearly separated from the ozone issue,’ says Anderson. ‘And now, in fact, they’re related in a way that was completely unexpected.’ This means that any attempts to engineer changes in the climate need to consider the effect on ozone. For example, says Anderson, proposals for injecting sulfate aerosols into the atmosphere to reflect heat could end up triggering more widespread ozone depletion and UV exposure.

Harris agrees that it will give proponents of such geoengineering projects an extra parameter to consider, ‘but it’s a complicated issue. Most scientists are thinking of geoengineering as a “back pocket” last case solution and we need to understand a lot more about its impact before we start doing it.’ Harris also adds that the longer such projects are delayed, the smaller any impact will be as the amount of chlorine in the atmosphere is slowly declining thanks to bans on CFC emissions under the Montreal Protocol.