The fate of the prey captured by our body's guardian antibodies can be determined by sugar molecules found on the antibody's surface.

The fate of the prey captured by our body’s guardian antibodies can be determined by sugar molecules found on the antibody’s surface. The news has come as a surprise to immunologists, who were unsure of these sugar molecules’ exact role, and could aid in the design of therapeutic antibodies.

Antibodies are protein structures that are well known for their ability to bind to other molecules or cells in our bodies with exquisite specificity. The antibodies’ targets, known as antigens, may include viruses or bacteria.

Once these invaders are held in an antibody’s vice-like grip, the antibody can bind to a cell and trigger the release of chemical messengers that attract more cells to the area, leading to inflammation. However, some antibody’s can also cause an antiinflammatory effect. 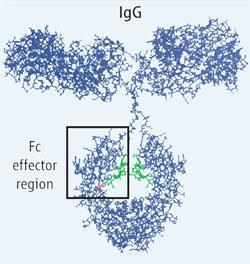 Now, Jeffrey Ravetch and colleagues at the Rockefeller University, New York, US, have shown that antibodies can switch between an inflammatory and antiinflammatory function depending on whether or not their sugar molecules have a compound called sialic acid attached to them.

The work marks an important shift in philosophy in this area, commented Raymond Dwek, a sugar biologist at the University of Oxford, UK. Although immunologists knew about the sugars on antibodies, nobody really understood the extent to which they influenced antibody function: ’it really emphasises the importance of sugars in determining function,’ Dwek told Chemistry World.

Ravetch analysed a mixture of Y-shaped antiinflammatory antibodies, which belong to a class of antibodies known as immunoglobulin G (IgG). IgG molecules have two fragments dubbed "Fab" at the top that bind to specific antigens, and one fragment dubbed "Fc" below that binds to a cell receptor. Sugar molecules on the Fc fragments sport many sialic acid units.

When Ravetch’s team removed these sialic acid residues, they were surprised to find that an intravenous infusion of IgG no longer had an antiinflammatory effect in mice. ’That means that subtle changes in protein glycosylation can have dramatic effects on biological function,’ Ravetch, professor of immunology, told Chemistry World. ’I was not expecting to find that the mechanism that was responsible resulted from the presence or absence of a sialic acid moiety.’

The researchers then looked at inflammatory antibodies that bind to platelets, small cells involved in blood clotting. Ravetch’s team found that adding sialic acid removed the inflammatory potential of these antibodies.

The findings are particularly relevant in the design of therapeutic antibodies, said Ravetch. If an antibody is being developed to optimise its ability to kill other cells, as might be the case in some cancer therapies, the data suggest that the Fc fragment should have as few sialic acid groups as possible. But when therapeutic antibodies are being developed to suppress inflammation, Fc sialylation needs to be enhanced.

The work marks an important turning point in scientists’ understanding of antibody chemistry, but Dwek believes there is still a long road ahead: ’the story of sugar in immunity is far from crystallised,’ he said. Ravetch’s team is now studying how the extent of IgG Fc sialylation is regulated in the body.

Colin Self is helping the food industry to find robust and reliable technologies for routinely detecting vitamins, but his technology could have wider implications, including for r...