Calculations on unusual bonding in the sulfur difluoride dimer FSSF3 have provided evidence to help explain why some compounds don’t follow long-established chemical rules.  Beth Lindquist and Thom Dunning at the University of Illinois, Urbana-Champaign show FSSF3’s peculiar behaviour arises because elements beyond the first row can form something called recoupled pair bond dyads. ‘We are finally beginning to understand the cause of the complexities in sulfur chemistry,’ Dunning tells Chemistry World. 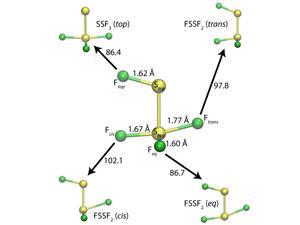 Lindquist and Dunning calculated the wave functions for FSSF3 and the molecules produced when FSSF3 loses a fluorine atom. They found that the two longest bonds – those in axial positions – have the greatest bond dissociation energies, breaking the inverse correlation rule. The reason why is because they form a recoupled pair bond dyad.  ‘A recoupled pair bond dyad is a combination of two very polar covalent bonds, with one big difference,’ Dunning explains. ‘If you break one of the bonds, the other becomes dramatically weaker.’

The extra weakening increases the energy difference between the two molecules, causing the unexpectedly large bond dissociation energies. Another aspect of the same bonding behaviour also plays a role in determining FSSF3’s dissociation path. When the fluorine atom at the end of the longest bond moves to make a F2S–SF2 molecule, it creates another recoupled pair bond dyad. That causes a strong bond to form between the sulfur difluoride units, which does not happen when the fluorine atom at the end of the second longest bond moves. Dunning says that these findings help identify the limitations of chemical rules.  ‘This will enable us to use these rules when they are valid and ignore them when they are not,’ he says. ‘We may also find new rules/propensities in species for which the old ones are not applicable.’

Henry Rzepa, a computational chemist at Imperial College London, agrees that studying FSSF3 can help understand reaction mechanisms better. ‘At a time when chemistry is often seen as evolving into “big is beautiful”, it is always worth remembering how the smallest of molecules can still teach very important lessons.’