Super-dipoles uncovered in chloroform by chemists in the UK could explain the solvent’s powerful ability to dissolve a large range of substances at high concentrations.

Chloroform is one chemistry’s most extensively used forms of liquid reaction media. However, as a suspected carcinogen, chloroform’s role in the extraction of natural products from plant materials, in NMR spectroscopy and as a reagent for chemical reactions underscores scientists’ aspirations to understand the science behind its remarkable properties.

Now, Christoph Salzmann, from University College London, and colleagues have used neutron diffraction to gain insight into the microscopic structure of liquid chloroform. ‘Some time ago, an organic chemistry colleague mentioned that there is something magic about the performance of chloroform as a solvent,’ says Salzmann. ‘So we decided to find out about the science behind the magic!’ 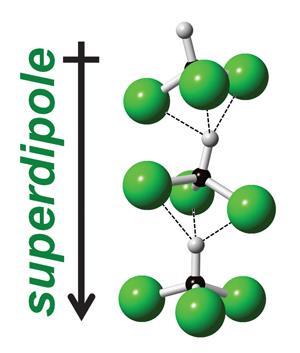 Team member Jacob Shephard explains that, like water, there is a strong directional aspect to chloroform’s intermolecular interactions: ‘this gives the liquid a distinct structure over several molecular shells.’ The team realised that a large percentage of chloroform molecules were aggregated in polar stacks and the net aligned dipole moments of these stacks were greater than those of individual chloroform molecules. ‘These sorts of super-dipole aggregates trigger a strong polarisation of electron clouds of nearby solutes, thus providing a favorable enthalpic contribution to dissolution and extraction processes,’ explains Carla Andreani, a condensed matter expert from the University of Rome in Italy, who was not involved in the work.

Maxim Fedorov, an expert in modelling solvent mediated molecular interactions from the University of Strathclyde, UK, says the work enhances understanding of the liquid state of matter. ‘It gives evidence that the common view on liquids as structureless media is an oversimplification even for a small-molecule liquid like chloroform.’

The team hope this new knowledge can be harnessed to create new, more environmentally friendly, high-performance solvents by deliberately creating super-dipoles in other liquids.