Rechargeable, energy-dense bio-batteries running on sugar might be powering our electronic gadgets in as little as three years, according to a US team of scientists. The battery, created by the group of Percival Zhang, an associate professor of biological systems engineering at Virginia Tech, can convert all the potential chemical energy stored in a sugar into electricity.

The prototype is similar in size to a typical AA battery and has an energy storage density of 596 amp hours per kilogram – roughly one order of magnitude greater than a smartphone’s lithium-ion battery. This means that the battery could last at least twice as long as conventional lithium-ion batteries on a weight-for-weight basis. 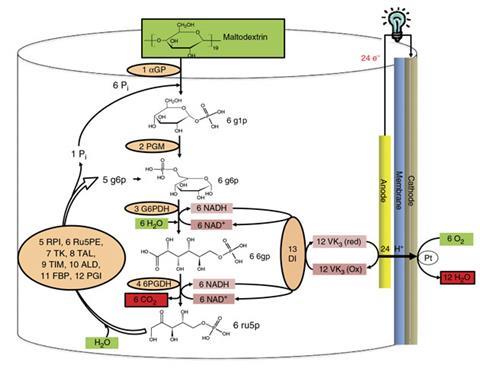 Sugar is an excellent source of energy. Most living cells generate their energy from glucose by passing it down an enzymatic chain that converts it into different sugars. This enzymatic cascade provides the necessary energy to create an electrochemical gradient. This, in turn, can be used to power an enzyme that synthesises adenosine triphosphate (ATP) – the universal biological energy currency. However, extracting this energy from a sugar if you’re not a biological organism is tricky – short of combustion, which is impractical to power handheld electronics.

To fuel their battery the team used maltodextrin – a polymer made up of glucose subunits. They then created an entirely new synthetic enzymatic pathway to extract energy from the sugar. Using 13 different enzymes they were able to strip, on average, 24 electrons from a single glucose molecule, which can then be harnessed to power an electrical device.

In contrast to natural catabolic pathways for cellular glucose oxidation, the team’s artificial pathway does not rely on ATP as an energy carrier. Instead, the researchers used two redox enzymes to oxidise glucose, generating reduced nicotinamide adenine dinucleotide (NADH) as the sugar is broken down. Another 10 enzymes further breakdown the sugars and feed them back to the redox enzymes to produce more NADH, with water and carbon dioxide the only by-product. NADH is a reducing agent and author Zhiguang Zhu describes it as ‘an electron shuttle that carries electrons in living cells from one molecule to another’.

In the battery, NADH first transfers the electrons stripped from the glucose to a mediator with the help of an enzyme. The mediator then delivers these electrons to the battery’s electrode, ready to power an electronic device. In this way, the battery mimics the way a living cell transfers electrons from one molecule to another to generate power.

According to the team, the battery already has a number of advantages compared with lithium-ion batteries: the bio-battery runs on renewable sugars, has a high-energy storage density, and it can be easily and quickly recharged by simply topping it up with more sugar solution. Also, while lithium is a limited resource, sugar is abundant and totally safe to use.

The cost could also be an appealing factor. The enzymes are much cheaper than the metals used in conventional batteries. And the bio-battery is also fully biodegradable, says Zhang. But for the battery to get onto the market, the researchers must now tackle two other challenges: increasing power density and lifetime, he adds.

Plamen Atanassov, a bioelectrochemist at the University of New Mexico, US, who was not involved in the study, says the research provides a viable alternative to combustion to directly generate electricity from biofuels. ‘It is the link between biotechnology and biofuels with fuel cells and electrochemical energy technology,’ he says.