US researchers have imaged cell-surface glycans – sugars bonded to proteins or lipids – throughout the internal tissues of live zebrafish for the first time. By monitoring glycan molecules in real time the technique could improve understanding of many biological processes including inflammation, bacterial and viral infection and cancer progression.

Previously, Carolyn Bertozzi‘s lab and others had made substantial headway in developing glycan imaging technologies. But their most recent efforts were still limited to imaging glycans only in the outer layer of developing zebrafish embryos. ’Any experiment that seeks to monitor molecules in live organisms is a challenge,’ says Bertozzi. ‘Problems that we had to address included cell and tissue access of probe molecules, metabolic clearance and stability issues.’ 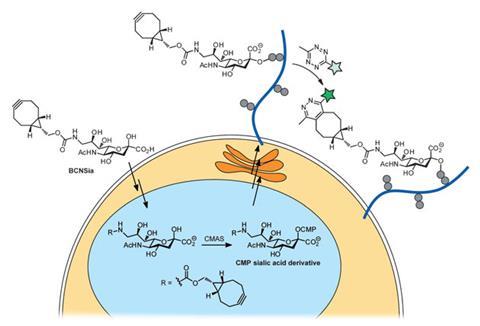 Now, Bertozzi, at Stanford University, and colleagues at the University of California, Berkeley, have made a further leap forward by figuring out a combination of metabolic labels, fluorogenic probes and bioorthogonal chemistries that could achieve whole body labelling. The key, Bertozzi says, was to harness the power of fluorogenic tetrazine probes, developed previously by other labs, and by using a cyclooctyne functionalised sialic acid derivative as a metabolic label.

First, the team injected early stage zebrafish embryos with the cyclooctyne-functionalised sialic acid (BCN-Sia), which was incorporated in cell surface glycans. Then a fluorogenic tetrazine probe was injected into the tail vein, which underwent a bioorthogonal ligation reaction with the cyclooctyne to produce a large fluorescence enhancement, enabling in vivo fluorescent imaging of sialylation – a process that’s crucial for a variety of cellular functions – during zebrafish embryogenesis. As the reaction is rapid there is no need for a catalyst, and the bright fluorescent tetrazine probes make imaging straightforward.

Bertozzi says she was surprised at how effective the technique was. ‘We had no idea what to expect at the whole body level and what we did see were very striking patterns.’ She adds that this method may open doors to studies of developmental sialobiology in live vertebrates and in real time. ‘Many biological processes cannot be fully understood ex vivo or in end-point assays.’

Neal Devaraj, whose lab at the University of California, San Diego, US, helped develop fluorogenic tetrazine probes, thinks the work is extremely exciting. ‘Combining fluorogenic alkenyl-tetrazines with cyclooctynes makes a lot of sense for multiple reasons, and so I believe there will be additional applications for their imaging technique, not just in imaging glycans, but also perhaps in the imaging of other biomolecules such as proteins and nucleic acids.’

However, Andre Neves, who investigates cancer imaging technologies at the University of Cambridge, UK, points out some limitations, including that this only works with transparent organisms. ‘In order to achieve incorporation of BCN-Sia in zebrafish embryos, the authors had to use microinjection, which is a very limiting technique from an experimental and translational view point. Moreover, at high doses the new sugar showed toxicity and mutagenic effects on zebrafish embryos. Although interesting from a basic perspective, the technique proposed here cannot be extrapolated to more relevant models of human disease.’