Diazomethane - CH2N2 - is an extremely useful reagent: it can be used in aziridination, carbonyl homologation, cyclopropanation, dipolar cycloaddition, epoxidation, esterification reactions and more. Unfortunately, the yellow gas is toxic and extremely explosive, which rather limits its widespread use in chemistry laboratories hoping to avoid repeated entries in their accident log. But now it has been tamed giving organic chemists a safe way to use this handy chemical.

The versatility of diazomethane has made it the focus of much research into finding ways to generate it in situ for a wide range of reactions. Indeed, it is more than a century since German chemist Hans von Pechmann found that nitrosamides produced diazomethane when treated with alkali. Subsequent work has led to numerous precursors for diazomethane; however, these compounds themselves are often explosive and notoriously carcinogenic. Continuous generation of the required diazomethane in the reaction flask could be a safer approach, allowing the reaction to proceed as required without voluminous quantities of the explosive ever being present in the vessel. 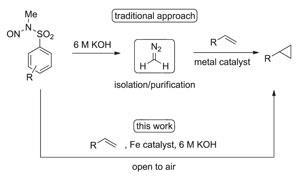 Now, Bill Morandi and Erick Carreira at ETH Zurich in Switzerland, have found a way to generate diazomethane in situ and potentially side-step the hazards. Their technique involves using a simple iron porphyrin complex to catalyse the cyclopropanation of styrenes, enynes and dienes in strong aqueous potassium hydroxide solution in the presence of a derivative of the relatively non-toxic conventional diazomethane precursor, diazald, N-methyl-N-nitroso-p-toluenesulfonamide.

The researchers point out that the olefins do not mix with water and so produce a biphasic reaction environment that allows the ’untoward’ reactive intermediate, the diazomethane, to be formed in what the team refers to as an ’operationally safe regime’ allowing the cyclopropanation to occur efficiently and safely. The diazomethane is generated steadily and rapidly consumed by the reaction so that there is little chance of an uncontrolled, explosive decomposition. Moreover, the procedure precludes the risk of laboratory personnel being exposed to the gas.

’The work provides a much safer and user-friendly process for this transformation,’ Varinder Aggarwal of the University of Bristol, UK, tells Chemistry World. ’It is remarkable that the iron porphyrin catalyst is stable to 6M KOH and part of its stability is associated with the biphasic nature of the system,’ he adds. ’The catalyst resides in the organic phase where it is "protected" from the harsh aqueous environment. No doubt other applications to other classes of reactions and other diazo compounds will be possible, broadening the scope of this very useful and remarkable breakthrough in synthesis.’