A simple proton is the key to a novel approach by US-based chemists to synthesise chiral amines and alcohols – a structural motif common to many organic molecules with pharmaceutical promise. The proton is at the heart of a potent organocatalyst designed by Amir Hoveyda and his colleagues at Boston College to generate these compounds with high enantioselectivity. The simple, robust catalyst offers a highly practical approach for synthesising many complex, chiral organic compounds.

‘This was a goal-oriented project, not a serendipitous discovery,’ explains Hoveyda. The team set out to find a better way to generate chiral homoallyl alcohols and homoallyl amines, via enantioselective addition of the three-carbon allyl group to a ketone, or to an imine, respectively. ‘Many people have worked on this class of reaction, and a really general, sustainable solution just does not exist,’ Hoveyda says. ‘They all have issues - either long reaction times or high catalyst loadings or precious metals, or a combination of all of these.’

As a starting point, the team took a known organocatalyst-promoted reaction in which an allylboron compound acts as the allyl source for the addition process. The reaction was metal-free, but sluggish – particularly the proton-mediated release of the amine product from the catalyst, and a subsequent catalyst-regeneration step. To solve both problems, Hoveyda and his team designed a modified boron-based organocatalyst around an embedded hydrogen atom. 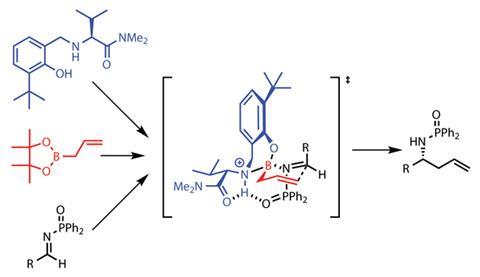 A central proton binds the imine, catalyst and boronate together

The inspiration for the catalyst design came from another project in Hoveyda’s labs, which had involved making a ruthenium-based catalyst incorporating multiple heteroatoms in close proximity. To solve the problem of repulsion between the heteroatoms, postdoc Sebastian Torker had embedded a proton within the structure, thereby holding the heteroatoms together through hydrogen bonding. ‘From that work, the idea came that we could design an organocatalyst where a proton would serve as the template to bring all of the pieces together,’ Hoveyda says. This proton not only holds the catalyst together and activates it toward substrate binding – it also facilitates rapid product release via internal protonation, overcoming a key limitation of the original method.

‘It’s a deceptively simple catalyst,’ says Rich Carter, who works on natural product synthesis and organocatalyst design at Oregon State University in Corvallis, US. ‘I think the power of this is the reaction conditions, it’s just remarkable how mild they are, and the substrate scope is really impressive,’ he adds. ‘These are really impressive transformations - if you need to make a homoallylic amine, this is the way you’d do it, it supplants everything else.’

Hoveyda says that the examples of substrate scope published so far only scratch the surface of the transformations that are possible with this and subsequent generations of his organocatalyst. In particular, Hoveyda says that his team has developed the reaction to work with simple ketones, as well as with halogen-containing substrates, for example.