The explosive potential of nitrogen compounds

Two separate groups have looked at the explosive potential of nitrogen compounds but while one group made an incredibly explosive compound, the others have developed a safer synthetic route for tetrazoles.

In Germany, Thomas Klap?tke and Davin Piercey of the University of Munich hoped to make a green alternative primary explosive using a chain of 10 nitrogens. However, the new compound is much more explosive than anticipated and can only really be of interest for refining models.

Currently, lead azide is used to initiate large amounts of secondary explosives like dynamite but it has the unfortunate side effect of being toxic. Klap?tke and Piercey have been trying to find green/non-toxic replacements for lead azide and were inspired to investigate long-chain nitrogen compounds by a surprisingly stable eight-nitrogen compound.

The pair hoped that a 10-nitrogen chain compound would be slightly more sensitive.  However, the bis tetrazole joined by an azo linkage proved to be so explosive that the dry compound easily exploded, destroying glassware and setting off further explosions as glass shrapnel hit other samples of the compound around the lab. 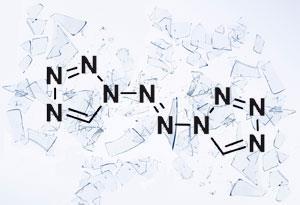 The new compound shattered glassware around the lab

’It was a bit of a surprise to see how sensitive it was,’ says Piercey, quickly adding that the compound was always handled carefully so that the accidental explosions ’were only an inconvenience.’

Timothy Jamison at the Massachusetts Institute of Technology, Cambridge, US, describes the molecule as ’really impressive’. Jamison has recently developed a flow reactor that makes the manufacture of tetrazoles (the precoursors of Klap?tke and Piercey’s compound) safer and thinks that he could in theory make the 10-nitrogen compound using a modified system although given the compound’s sensitivity ’we probably won’t’.

As well as being used to make explosives, tetrazoles are used in many industrial applications, from catalysis to medicinal chemistry. The problem is that tetrazole manufacture can itself be explosive as hydrazoic acid is produced.

Jamison has bypassed this problem by using flow so that there is no place for any hydrazoic acid to collect. With this approach, Jamison can use high temperatures and pressures to produce high yields of tetrazoles using chemistry that would otherwise not be viable.

As Jamison investigated the process further he found that it could be made simpler to run and scaled up to an industrial scale. He has shown that scaling up the process by a factor of 10 should yield around 40 kilos of product annually, which he suggests would be enough for a global supply of some products.

This is Jamison’s first bit of tetrazole chemistry, but his interest in tetrazoles grew out of a collaboration with Novartis. Now that he has developed an interest in azide chemistry in general, Jamison’s group is looking to develop some other azide reactions using flow.

Jamison’s flow method would not necessarily help Klap?tke and Piercey’s work, since their compound is mainly dangerous when dry. But Pierecy does suggest that the flow reactor would be ’very useful’ for the manufacture of tetrazole precursors.

Despite the reactor’s usefulness, Piercey and Klap?tke have no desire to keep making longer and longer nitrogen chain compounds. Instead, Piercey concludes: ’as always, the focus is on practical compounds to replace currently used secondary and primary explosives with focus on safer, cheaper, greener, higher performing materials.’