The molecular cannibal in vitamin B12 synthesis

Scientists have put in place the final piece of a puzzle started 20 years ago.

Scientists have put in place the final piece of a puzzle started some 20 years ago with an undergraduate experiment, a Petri dish of bacteria and a sprinkling of laundry whitener.

An enzyme called BluB single-handedly carries out an act of ’molecular cannibalism’, pulling apart vitamin B2 (riboflavin) to produce a key component of vitamin B12 known as 5,6-dimethylbenzimidazole (DMB). This fills a glaring gap in our understanding of the biosynthesis of this important vitamin, says Graham Walker, professor of biology at the Massachussetts Institute of Technology. 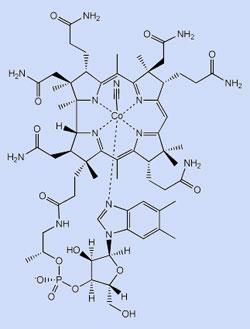 Vitamin B12 synthesis, en route to deciphering a mystery

The discovery of the BluB enzyme is rooted in the mid 1980s when Walker got his undergraduates to give colonies of symbiotic bacteria a light dusting of laundry whitener. The result was a labful of Petri dishes that fluoresced under UV light where polysaccharides produced by the Sinorhizobium meliloti bacteria had bound to the whitener.

It was this simple crowd-pleasing experiment that led to the identification of mutant Sinorhizobium whose polysaccharide production had gone into overdrive, said Walker. After years of research, it turned out these bacteria had a defective BluB gene, leaving them unable synthesise their own DMB and therefore vitamin B12.

The precise mechanism by which BluB catalyses the cannibalism of vitamin B2 remains to be established. But to Steven Ealick and Tadhg Bedley of Cornell University’s department of chemistry and chemical biology, the simplicity of the enzyme’s active site revealed by Walker and his colleagues suggests that flavin may react with molecular oxygen and then get dismantled during a series of reactions with water. ’Close relatives of all of the reactions in this pro?posal have been found in other systems,’ they notein an accompanying article.

Another mystery is why Sinorhizobium and other B12-synthesising microbes go to all the trouble in the first place. Humans, for example, are unable to synthesize vitamin B12 and are happy to get it from their diet. Similarly, Escherichia coli can’t make B12 from scratch, but can use it if it’s available, said Walker.

One possibility he and his colleagues are exploring is that B12-dependent enzymes are more resistant to oxidative stress than their B12-independent counterparts. ’Rhizobia encounter oxidative stress from the plant while they’re establishing symbiosis,’ said Walker. Bacteria that have found a way to cope with this stress would have been at a selective advantage, he suggests.

Whatever the reason for the evolution of this biosynthetic pathway, Walkerand his colleagues propose that a new family of enzymes - the ’flavin destructases’ is in order.