Did Lavoisier's theory of oxygen really extinguish the idea of phlogiston, a hypothesized fire-like element released during combustion, overnight?

The standard textbook account of the chemical revolution has the new chemistry of Antoine Lavoisier winning over the entire chemical community almost overnight. But new research reveals how far from the truth this really is. 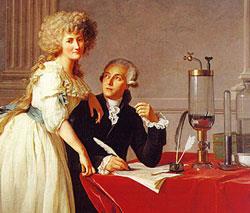 Lavoisier, developer of oxygen theory, with his wife

’The chemical revolution as we know it never really happened,’ says Hasok Chang, a historian of science at University College London. ’There were numerous respectable and respected chemists who didn’t jump on the Lavoisier bandwagon,’ he says.

In particular, Lavoisier’s oxygen theory is frequently assumed to have rapidly replaced the idea of phlogiston, a hypothesized fire-like element released during combustion. But, says Chang, it was several decades before the idea of phogiston was finally extinguished, suggesting Lavoisier was not quite the revolutionary figure that the conventional account would have us believe.

Back in 1667, the German scholar Johann Becher proposed the existence of what would become ’phlogiston’ to account for the flames and heat given off during combustion.

It was Lavoisier’s obsession with weighing the reactants and products of a reaction that really turned the phlogiston theory on its head. When a substance burned in air, he found, it increased in mass rather than decreased as phlogiston theory predicted. Lavoisier coined the term ’oxygen’ to describe the part of the air that combines with a combustible substance when it burns.

But, says Chang, contrary to the widespread belief that the appearance of oxygen consigned phlogiston to the intellectual scrapheap, there were plenty of high-profile figures who retained a place for phlogiston in their chemistry long after the publication of Lavoisier’s Traite Elementaire de Chemie in 1789.

These ’dissenters’, as Chang describes them in a paper delivered to the annual meeting of the British Society for the History of Science, can be divided into three categories: old-school die-hards like Joseph Priestley who had staked their careers on phlogiston; fence-sitters like Friedrich Gren who found a way to have both oxygen and phlogiston working alongside each other; and upstarts like Humphry Davy, who saw Lavoisier’s system as a fad that was on the way out.

The idea of this third group of dissenters is ’pretty new’, says Frank James, historian of science at the Royal Institution from where Davy launched his broadside against Lavoisier. ’Chang’s arguments sound persuasive,’ agrees Carl Djerassi, professor of chemistry at Stanford University. In 2001, he and fellow luminary Roald Hoffman wrote Oxygen, a play that dramatised the transition from phlogiston to oxygen.

As an illustration of this third category, Chang has dug up a telling exchange between the long-time president of the Royal Society Joseph Banks and William Herschel in 1800, over a decade after Lavoisier’s Traite. ’I think all my friends are of the opinion that the French system of Chemistry.already totters on its base and is likely soon to be subverted,’ wrote Banks.

One possible explanation for such anti-Lavoisierian rumblings is that flaws in the ’French system of Chemistry’ had begun to emerge. In particular, Lavoisier’s ’theory of acids’, based on his belief that all acids contain oxygen, was coming under considerable attack. ’Lavoisier had made a rather embarrassing prediction that when you burn anything it would become an acid,’ says Chang. There were even problems with Lavoisier’s theory of combustion itself, when it emerged that combustion could occur in the absence of oxygen.

So why is it that more than 200 years on, Lavoisier’s name is synonymous with revolution? Chang has several ideas. ’Lavoisier and his colleagues did run an effective and well-coordinated campaign for their new chemistry,’ he says. His prominence is probably also down to a touch of national pride, says Chang. ’About half a century later, there was a great deal of glorification of Lavoisier.’

But more importantly, suggests Chang, Lavoisier’s attention to balancing weight in his reactions made a major contribution to the transition from a chemical universe ruled by immutable phlogiston-like ’principles’ to one comprised of simple, lego-like building blocks. It makes more sense, says Chang, to see Lavoiser’s contribution as ’a ripple riding on a large wave’ that ultimately washed up and ties his name to the atomic world view we know and love.