Too much caffeine in your coffee?

UK scientists have found that caffeine levels in espresso coffees purchased from coffee shops are well above the recommended daily allowance set by the Food Standards Agency. This could have implications for public health as consumers are unaware of the caffeine content of their daily fix. 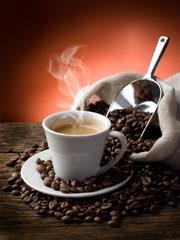 Coffee consumers often experience increased alertness owing to the caffeine content, but for some, caffeine can lead to increased anxiety. Caffeine stays in an adult body for around five hours but can be up to 30 hours for women taking an oral contraceptive, pregnant women, young children and people with liver disease. According to the Food Standards Agency, pregnant women should restrict caffeine content to below 200mg per day. A 225ml cup of instant coffee is said to contain 60-85mg of caffeine and a 28ml espresso around 30-50mg.

Alan Crozier and colleagues at the University of Glasgow, UK, analysed espressos (cup size 23-70ml) purchased ’to go’ from local coffee shops using high performance liquid chromatography and found large variations in the caffeine (51-322mg) levels. The findings indicated that with one or two espressos per day, people at risk from a high caffeine intake could consume more caffeine than the Food Standards Agency guidelines recommend.

However, ’it is not simply a matter of reducing the levels in coffees as many consumers do not have adverse side effects and like the "kick" of a high caffeine coffee,’ says Crozier. ’As long as you can tolerate caffeine and do not suffer adverse side effects, and are neither pregnant, young, or have liver disease, enjoy drinking your full-bodied coffee.’

Commenting on these results, Nikolai Kuhnert, an expert on polyphenol analysis in food and drink at Jacobs University, Germany, notes that the reality of caffeine intake through coffee is very different compared to previous assumptions. ’The authorities that issue safety guidelines and recommendations base their opinion on data that are not necessarily compatible with the real world and it is always worth checking what reality really looks like,’ he concludes.