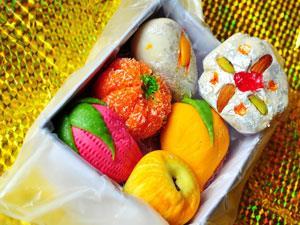 The illegal colours found in some Indian sweets are used in the paper, textiles and leather industry

India has just celebrated Holi, its festival of colours, where brightly dyed sweets are handed out to children and adults alike. However, a nationwide study has discovered that many of the colourings used in those sweets and savouries contain illegal and toxic dyes not for use in food.1

Mukul Das at the Indian Institute of Toxicology Research, Lucknow, and colleagues found that while there has been an overall decline in the use of illegal colours in recent years, they are still widely used. The team detected illegal and potentially toxic colours in around 16% of sweets and savouries tested. They also found that even with sweets that contained safe colours, 58% exceeded the cap of 100 mg/kg determined by the Food Safety and Standards Authority of India (FSSAI).

The scientists found six banned dyes in the sweets tested: rhodamine B, orange II, metanil yellow, malachite green, quinoline yellow and auramine. These are mostly used by the paper, leather and textile industries. FSSAI rules allow only eight colours to be used in food, and all the others are classed as non-permitted colours (NPCs).

Das says that a major problem with vendors and shops selling sweets and savouries is that they're not aware of FSSAI standards, and end up using more of them than are permitted. ‘But they know which colours should not be used and are lured into buying the non-permitted dyes because they are cheaper than the approved ones,’ he says.

‘All these dyes are harmful and can cause diseases like cancer upon chronic consumption,’ says V Sudershan Rao, a food safety expert at National Institute of Nutrition, Hyderabad, India. ‘But since these quantities are not sufficient to cause any acute health problems, the real impact of these dyes on consumers' health cannot be assessed.’ Research at the National Institute of Mental Health and Neuro Sciences, Bangalore, found that chronic exposure to metanil yellow causes neurotoxicity in rats.2 The dye is commonly found in a popular Indian sweet dish called jalebi.

The survey was the largest of its kind in the country, and serves as a wake-up call to regulators. Rao says added vigilance is needed by the government to stop the use of illegal, toxic dyes. ‘The study should help policy makers revisit the quantities of permitted colours used in various foods,’ Rao says. ‘Right now, there's a uniform upper limit of 100mg/kg, and 200mg/kg in a few cases, for all permitted colours. The cap for food dyes should be reset according to their individual toxicity potential.’