A sensor to detect toxins produced by algae in drinking water

A green and simple method to make a sensor to detect one of the most toxic cyanotoxins, microcystin-LR, has been devised by scientists from China. Cyanotoxins are produced by blue-green algae and can contaminate drinking water.

In 1998 the World Health Organisation (WHO) set up a provisional guideline limit of 1 mg L-1 for  microcystin-LR in drinking water so detecting it in the environment is important. 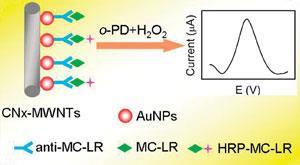 The team immobilised an antibody for microcystin-LR on their nanosensor and used it to detect the cyanotoxin in water samples. They found that microcystin-LR could be detected at levels much lower than the limit set out in the WHO guidelines.

Ju explains that although several methods can detect the presence of microcystin-LR, they are time-consuming, need expensive equipment and advanced technical expertise. Ju’s nanocomposite is cheap to make and shows a wide concentration range, low detection limit, good reproducibility and could successfully detect microcystin-LR in polluted water samples, said the researchers.

’This system is more biocompatible than existing systems, so leads to enhanced sensitivity for microcystin-LR immunosensing,’ says Dianping Tang, an expert in electrochemical immunoassay technologies from Fuzhou University in China.